Although it still doesn't work yet, settings controlling the long-rumored Ambient Mode for Chromebooks have appeared in the current Chrome OS Canary channel. Controlled by an easily enabled flag, the new options appear in Chrome OS's Personalization menu. At least two different modes are planned: Google Photos and an art gallery.

First spotted by the folks at Chrome Story, the new setting is only live on Chrome OS's current Canary channel release (v83.0.4099.3), so you probably won't find it on your Chromebook. It's also hiding behind a flag (chrome://flags -> Enable Ambient Mode) required for it to work, and that flag was not enabled for us by default. 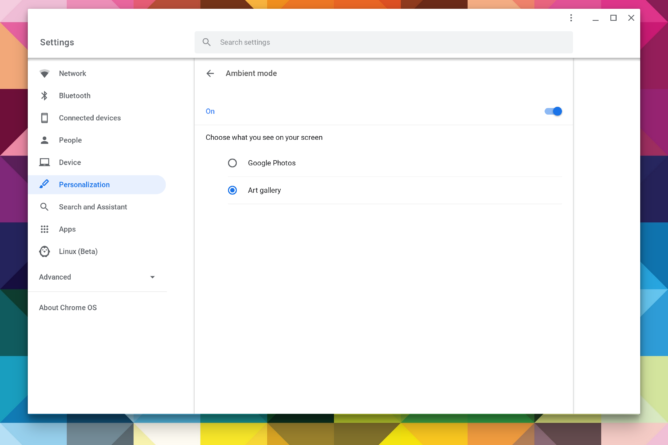 Options controlling the new Ambient Mode live in Settings -> Personalization -> Ambient mode. From there, you can ostensibly toggle the feature on and off and switch between two different content sources: Google Photos and Art gallery.

If it works anything like the Ambient Modes on Android TV, Chromecasts, Assistant-powered Smart Displays, or supported Android devices, then it will rotate between images in those categories as configured when the device is plugged in but not in use — though that behavior could vary, we don't know yet. Previously, phones and tablets behave a little differently than bigger-screen devices in Ambient Mode, so it will be interesting to see which direction the implementation on Chromebooks goes.

We've been hearing about an Ambient Mode for Chrome OS since July last year, but there's still no sign of a working version. As you can see above, settings for it have appeared in the Canary channel, but it's not functional yet. When it is, there's a good chance there will be a weather widget similar to the one on Ambient Mode for Chromecast and smart displays. A new Chromium Gerrit entry spotted by Chrome Unboxed tells us this is something Google is working on at the moment, but it sounds like its at the prototyping stage. Looks like we'll have to wait a little bit longer for the feature to finally arrive on our Chromebooks.

The iPad is the only tablet worth buying during lockdown