As spotted by 9to5Google, the carrier has published "coming soon" entries for both the G Power and G Stylus. Both phones feature a Snapdragon 665 and triple rear cameras. The $250 Power has a 5,000mAh battery and 64GB of storage while the 128GB Stylus at an MSRP of $300 trades a little bit of battery for... well, a stylus.

These phones will be tuned to work between Fi's partner carriers — Sprint, T-Mobile,  and U.S. Cellular. 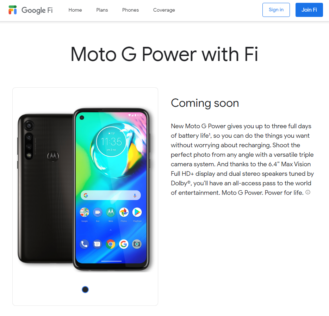 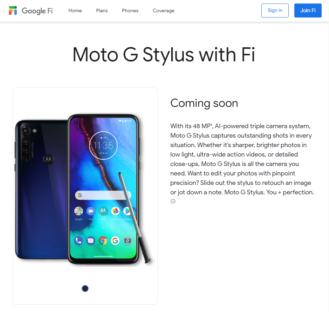 No due date on this development yet, but Amazon and Walmart will be selling these phones starting tomorrow, April 16.

Google Fi currently has the Moto G7 in its portfolio, but that phone's currently out of stock.

With electronics, who knows what "coming soon" really means? Could that spell a wait of a day or two, or are we going to be stuck in some Galaxy-Home-like purgatory? Last week we spotted the Moto G Power and Moto G Stylus showing signs of getting ready to come to Google Fi, and today the pair is already going official.

Stay connected with #MotoGPower and #MotoGStylus, now available on Fi from $199.

Pricing looks the same as we've seen elsewhere, with the Moto G Power and Moto G Stylus going for about $250 and $300, respectively — though you will get $50 knocked off when activating with Fi.

The two new Motos join the Pixel 4 and Pixel 3a families as built-for-Fi devices, though subscribers are also free to bring a compatible phone of their own.