Installing a houseful of smart home upgrades gets expensive fast, which is why we're always excited when budget-conscious Wyze releases a new device. From internet-connected cameras, to security sensors, to smart outlets and even lightbulbs, Wyze has managed to prove itself in new product categories time and time again (well, with the occasional hiccup along the way). Now it's tackling the smart lock market, with the release of the aptly named Wyze Lock. How will it compare to more expensive solutions? Let's take a look.

There are a lot of different ways to build a smart lock, and the biggest question seems to be "how much of your old lock do you want to keep?" On one end of the spectrum you've got devices like the Nuki that keep your existing lock 100% intact, and just connect to it externally. At the other extreme is something like the Schlage Encode, that fully replace your old lock hardware.

Wyze's solution is somewhere in the middle: You keep your exterior hardware, and you can keep using your same key, but the Wyze Lock replaces your deadbolt's interior thumb-turn latch. 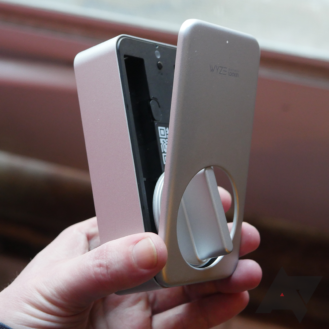 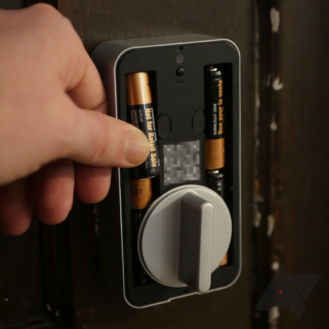 The Lock itself has a solid metal body, with prominent thumb-latch of its own. A magnetic face panel conceals the 4AA batteries powering the unit, and easily pops off to access them. There's not much mounting hardware, but everything you need is here, including a rear bracket, three adapters to connect the Wyze Lock to you existing lock's internal workings, and even a helpful piece of tape to hold your old lock in place during installation.

In addition to all that, there's also the Wyze Lock Gateway, the hub that connects the Lock itself to the rest of your network. 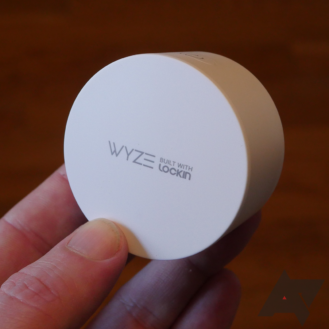 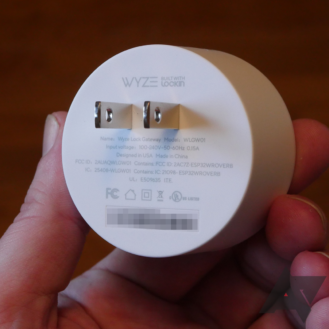 Find somewhere near your Wyze Lock to install its Gateway and get the smart lock online.

Getting started with the Wyze Lock is incredibly straightforward. To begin, you just unscrew the interior side of your existing deadbolt (using that tape I just mentioned to keep the exterior bit secure). Then using those very same screws you mount the adjustable rear plate, keeping the "up" arrow ... well, you can guess where it should be pointing.

The app then talks you through identifying which of the colored adapters you're going to need to interface your lock hardware with Wyze's. This could easily be the most intimidating part of setup, but a well-done guide with lots of useful images helps walk you through it painlessly. 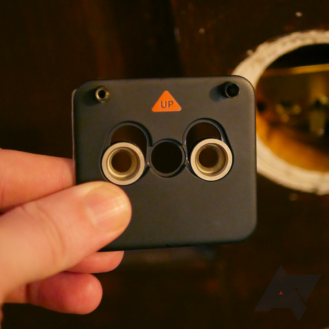 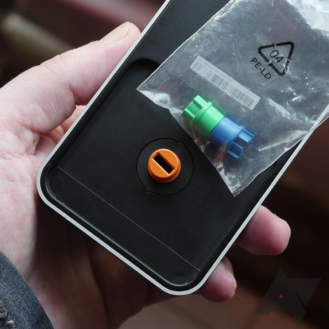 This bracket screws in place of your old thumb-turn; a set of adapters help the Wyze Lock work with your existing hardware.

With that in place, you can screw the Wyze Lock body to the plate, and you're pretty much done on the hardware side. The app will talk you through connecting to the Gateway and your WiFi, as well as the process for calibrating the Lock's sensors, which let it detect when the door is open and closed. 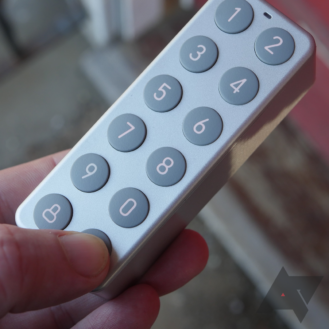 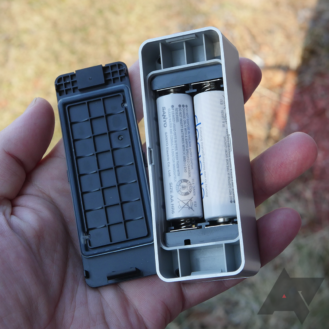 Optionally, you can also install the Wyze Lock Keypad — or at least you will be able to, once it becomes available this May. The Keypad is powered by two AA batteries and mounts wherever you like with its included bracket. It offers one-touch locking, an LED backlight, and supports 4-8 digit codes. I just wish it were the more familiar three-column design, rather than the two we get, and that the whole unit were a bit thinner.

Once all set up, the Wyze Lock appears in the Wyze app alongside your cameras, outlets, and the rest of the company's gear. The main view gives you a quick lock/unlocked indication, and tapping through pulls your main Lock interface with lock/unlock toggle, door-open status, and a log of recent Lock events.

In addition to manually locking and unlocking your door through that screen, the app also offers a couple optional automatic options. Auto-lock detects when the door's been closed and, well, you can guess the rest. This can be configured to happen immediately, or on a time delay of up to an hour. The feature works well, although the "lock at once" option can be a little aggressive if you're closing the door too slowly. But honestly, I've been locked out without my phone too many times to trust myself using this at all.

There's also an auto-unlock mode that uses geofencing to sense when you come home. This one's been a little hit-and-miss for me, sometimes failing to unlock on my return. But at least since its operation requires having your phone on you, you can always just unlock manually with the app.

To stay on top of what's going on with your Wyze Lock, the app offers both lock and unlock notifications, and there are optional alarms for things like leaving the door wide open for an extended period — some nice bonuses.

As we'd only expect from a smart lock, you can share access to the Wyze Lock with other people. The primary way of doing that is through the app: you enter someone's email, they'll get an invite, and then be able to control your Lock through the Wyze app on their own phone.

If you happen to pick up the Wyze Lock Keypad (when that comes out), you also have the option to just assign codes to your guests. These can be permanent, one-time-use, or operate on whatever schedule you'd like. 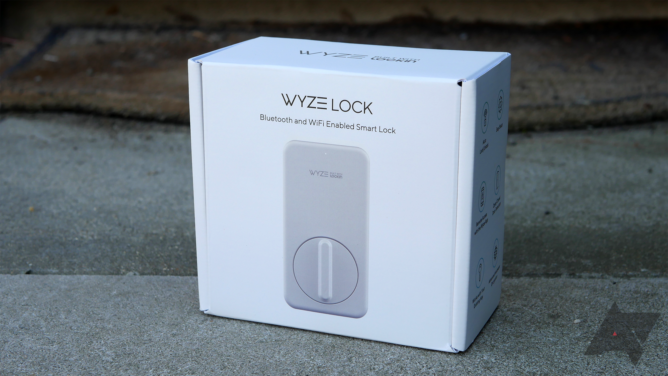 On the surface, everything seems fine about what the Wyze Lock is doing, but I've noticed a thread of unexpected behavior that's sort of undercutting my confidence in the product, and preventing it from getting a higher score. First has been inconsistent behavior from the door-closed sensor. While I've been able to calibrate the sensor and use it initially, after a week or so it starts thinking the door's constantly ajar. Recalibrating fixes this, but the issue has recurred multiple times.

That alone is more of an annoyance than a deal-breaker, but I worry that it's driving a separate, larger issue: the battery life I've observed from the Wyze Lock is far from what was promised.

Wyze claims users should see 5-6 months of operation on a set of 4 AA batteries. I'm about halfway through that timeframe, and my batteries are at 7% currently. This is especially surprising because I've been using a Schlage Encode for a bit longer than the Wyze Lock, which also uses 4 AA batteries, but connects to WiFi directly, rather than with an external hub like Wyze. So while the Schlage lock should be eating a lot more power, its batteries are still at 41%. There's just no good reason the Wyze Lock should be using this much power. I'm hopeful that if a software update eventually solves that door-sensor issue, perhaps battery life will also improve.

Sure. From the feature set, to the hardware design, to a very attractive price tag, there's really a lot to like about the Wyze Lock. This could have been a real bare-bones model, but Wyze really stepped up with little extras — like I was out the other night and realized I forgot to lock my door, but thanks to the Lock's position-detection and the app's logging, I could see that no one had even tried to open it, giving me some extra peace of mind.

I really wish the Keypad didn't feel like such an afterthought, and I'm concerned about software stability and the consequence that threatens to have on what's proving to be questionable battery life. Even with those issues, this is generally a well-thought-out, largely well-executed, and ultimately great value in a smart lock.

Galaxy S10 Lite on sale in US starting at $650, comes with free Galaxy Buds at Amazon