Ever since the company's short-lived relationship with Cyanogen, Inc. collapsed, OnePlus has shipped a custom build of Android called OxygenOS on its phones. It's generally regarded as one of the best manufacturer skins, since it adds useful features on top of stock Android, while not modifying the core Android experience (which can sometimes break apps). However, there is one aspect of OxygenOS that is a clear regression compared to stock Android: dark mode.

OxygenOS has allowed phone owners to change the look of the operating system for years, but Android 10 introduced a system-wide dark theme, with the ability for applications to detect the change and adjust their look accordingly. However, rather than simply use what stock Android 10 already provides, OnePlus did something... different.

The dark mode setting in Android 10 is present on OxygenOS, but it's only accessible by selecting the 'Dark' tone within the Customization section of the Settings app. Not only does the setting take several taps to access, but more importantly, OnePlus ripped out the quick settings toggle for dark theme that is present in stock Android 10.

Switching the theme on OxygenOS takes a few taps.

This defeats one of the main uses for dark mode: enabling it on a time or environment basis. If I'm in a dark room and want to avoid burning my retinas with Android's mostly-white applications, it only takes a single tap to enable dark mode.

Placing the feature several layers deep in the Settings app ruins the ease-of-use that dark mode has on Pixels and other devices. I'm not the only one to complain about this, either — there are plenty of forum threads and social media posts about the issue.

@oneplus I have some feedback for OxygenOS, currently the darkmode can only be changed from the customization settings. This changes the Android dark mode that is new in Android 10, and it changed the OxygenOS theme to dark. (Thread) 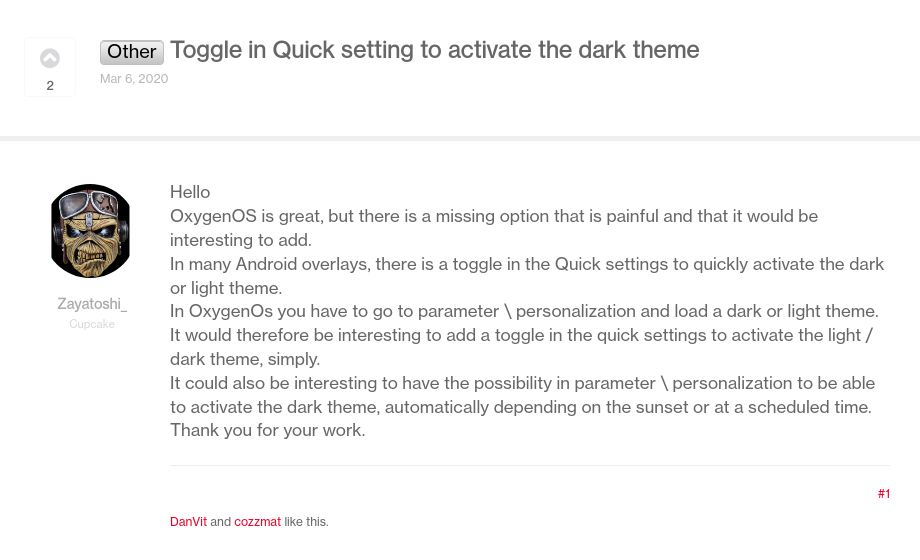 It's also a bit strange that OxygenOS doesn't have any option to change the theme based on the time of day. Samsung's One UI has offered an automatic toggle since Android 9 Pie, and Pixels even received the feature last month. It's also coming to all devices with the release of Android 11, though it's unclear if OnePlus will keep the stock implementation.

I'm well aware many people pick one system theme and stick with it 24/7, but this is still a case of OnePlus significantly alternating a core Android feature, and making it less accessible in the process. Please bring the quick settings toggle back, OnePlus.

Fix is on the way

It seems OnePlus has finally seen the light. The company announced today that it will add a dark mode toggle to the Quick Settings panel on OxygenOS, functionality similar to the one in stock Android 10. You can read more about the changes here.