Android’s built-in backup system has improved immensely over the years, but it still falls short in a number of key areas, leading to much frustration for users. Its shortcomings are even more apparent when compared with Apple’s iCloud backup for iPhones, which — while not perfect — is better at copying over app data so users don’t have to spend hours setting up a new phone.

Most people would hope to use their backups infrequently, maybe every couple of years when they upgrade to a new handset, but it’s during life’s less pleasant situations that this service should really come into its own. If you break or lose your phone, a full and recent backup of everything on it waiting for you in Google Drive should be an invaluable resource that helps get you back up and running with minimal added stress. Unfortunately, it’s not that straightforward.

What are the issues?

For an operating system as mature as Android, its backup procedure leaves a lot to be desired in its current state. There have been some well-documented bugs in recent years that will cause it to fail completely, such as this doozy that went unchecked for nine months before outlets like us were even aware of it. Affecting devices running Android 9 and 10 across multiple manufacturers, the bug leaves Google Drive sync in a perpetual “waiting to backup” state. Workarounds such as temporarily turning off lock screen security measures seem to solve the problem long enough to at least do a single backup, but that’s not an acceptable long-term solution. Even when Android backups do succeed and you’re able to restore a device, random bugs can be transferred in the process, causing new hardware to exhibit issues that your old one may not have.

Another fundamental point of contention is that Google Drive only maintains a single backup per phone or tablet. So if something goes wrong while you’re syncing to your account, such as a hardware failure or network disruption, there’s a chance your backup could be corrupted. There’s no going back from this — all of your data will be lost, and that defeats the purpose of creating a backup in the first place. Should you use another phone for a short time (let’s say you experiment with an iPhone, you traitor) and switch back, you might not have a backup left to restore from. They’re set to expire after two months, and Google won't inform you before it deletes your data.

What you see is what you get, sort of.

The biggest issue by far is that Android doesn’t reliably back up and restore app data like iOS does (more on that later). There are third-party apps that claim to be able to do what Google can’t and copy across all your app data, but they’re often too complicated for the average user and the results vary wildly depending on the hardware and OS version. These solutions are also liable to stop working every time a new version of Android is released. It’s fair to argue that the backing up of sensitive device data should not be left to third-party apps in the first place — Google ought to offer a dependable mechanism for this.

Some complaints about Android backups are less valid due to justifiable technical limitations. For example, it’s not possible to use a backup from a newer version of Android to restore a phone running an older version. This makes sense, as the outdated firmware won’t necessarily know how to handle newer data and various compatibility issues could arise. iCloud backups are subject to this same restriction. While this is understandable for things like app data, there doesn’t seem to be a good reason why device settings and WiFi passwords couldn’t be transferable. If switching from one Android version to another presents obstacles, so does going from one OEM to another — often the restoration of any meaningful data fails without explanation. To complicate matters further, some manufacturers will try to encourage you to use their proprietary backup service, making it harder for you to change to a different device maker down the line.

Apple simply does it better

Although backups on iPhone suffer some of the same problems, they also outperform Android's offering in key areas. When you sign in to a new iPhone, your iMessage chats will automatically appear since the app itself does its own, separate iCloud backup. SMS messages on Android must be restored during device setup — if you decide to start fresh without importing any old device data, your messages will be lost in the ether. MMS messages are not backed up, either, unless you pay for a Google One subscription. Again, there are third-party services that can do this job better, but we shouldn't have to look elsewhere. Google does know how to do cloud sync the right way, as it does so with Gmail, Google Calendar, Google Photos, and contacts saved to your Google account, so it's a shame to fall short with SMS.

That's just one example of iCloud making it easier to restore an app's state, but it permeates throughout iOS. Both operating systems claim to fully backup apps and their data, but in reality, Apple's approach is far superior. After restoring a new iPhone from a backup, you won’t need to sign into the vast majority of your apps and games, and all of your settings and preferences will also be present on your new device, exactly as you left it. This makes moving from one iPhone to another smooth and easy, something Android users can only dream of.

The illusion of choice.

The settings screen above would have us believe that app data is covered by Android's Google Drive backup, but it's impossible to ascertain which apps actually support full data backups and which don’t. The unfortunate truth is that many app developers opt-out of this because it’s difficult to implement and prone to failure. There’s also only 25MB available per app, which would be plenty for some but not enough for others. It's often far easier for Android developers not to support app data backups than try to get it working consistently. By contrast, Apple automatically backs up app user data via iCloud on iOS whether developers like it or not. They're therefore required to keep their app data tidy to ensure efficient backups, which is why users switching to a new iPhone find restoring new phones such a breeze.

Even if an Android app does support a full state backup, there are still numerous reasons why it still might not seamlessly restore on a new phone. If you’re moving between two Android devices made by different manufacturers, app compatibility issues often cause app data not to be reinstated. The broad distribution of Android OS versions on active devices exacerbates this problem — it’s likely that you’ll be updating from an older version of Android to a newer one, meaning the app data you’ve backed up is potentially incompatible with your newer device. Security and privacy offer additional headaches for developers when app data is moved from one location to another.

It may be defensible that third-party apps decide not to support backups on Android given all of these complications, but it’s inexcusable that Google’s own apps don’t restore as you’d expect. Even once you’ve signed into your Google account on a new phone prior to restoring your apps, you invariably have to set up each one before they function correctly and start serving notifications. You won’t get emails via Gmail, reminders via Tasks, or commuter updates from Google Maps until you’ve opened each app and gone through the familiar intro screens for the 100th time. If any apps should be good to go from the off, it’s these, yet Google still hasn’t figured this out somehow. 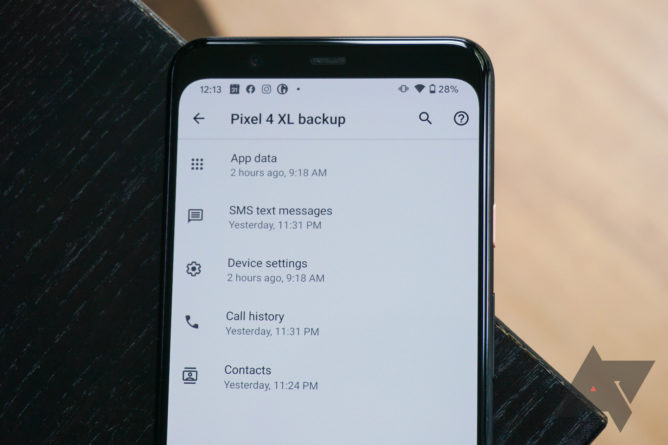 All of this makes setting up an Android phone a painful experience for many people, especially for those of us who have to do it often. Every time I receive a new phone for review, I have to set aside at least a couple of hours to systematically sign into and set up every single app I use so that I can fully assess the phone. iPhone users are spared of this fate, and I think everyone in the Android camp has a right to be peeved about that.

What should Google do to fix Android backups?

It would be too simplistic to say Google should copy Apple because it does things better, especially since Android and iOS are very different beasts. Android is not the closed system that iOS is — there are numerous OEMs, umpteen OS versions installed on thousands of different active device models, and quite a few more apps on the Play Store than on the App Store. Establishing greater control over Android backups is therefore a daunting task for Google, but it shouldn't be impossible.

Google ought to work with OEMs and developers on a standardized protocol that meets everyone's needs.

The first thing Google can do is fix the various bugs that currently prevent users from successfully backing up or restoring data. Similarly, storing more than one back up for each device would go a long way to mitigating against unforeseen issues that lead to corrupted backups — what use are they really otherwise. Reliability is ultimately the number one objective that a backup system should strive for, and there’s plenty of work to be done here. The all or nothing approach currently stops users from restoring anything after the initial phone setup is completed, which doesn't allow enough flexibility for users.

If backups on Android are ever to match Apple’s iOS solution, Google has to get app developers on board. Simply forcing them to opt-in to supporting full state backups isn’t enough, Google must ensure the system is robust enough first. The only realistic way to do that would be to work with developers and OEMs on a standardized protocol that meets the needs of everyone involved. That’s no easy task, but users deserve a better solution, and it’s Google’s job to do everything it can to provide it. If Apple is able to deal with the many problems that arise when transferring data between different phone models and OS versions, Google should be able to as well.