The Play Store has a problem with sleazy apps that overcharge customers for basic functionality via subscriptions. A lot of people often don't even realize that they're signing up for expensive plans due to apps highlighting free trials, conveniently concealing that they automatically turn into paid subscriptions. To combat these frauds, Google will instate new Play Store policies that force developers to disclose exactly how much and what for they're charging starting June 16 while the company will also send out emails warning customers before trials turn into paid subscriptions. The updated policies additionally prepare a change for location permissions in Android 11 — developers have to get approval from Google before they're allowed to access background location.

Google writes that going forward, developers will have to specify "whether a subscription is required to use all or parts of the app." If the former is the case, the prompt to pay should be easily dismissable. An app further has to explicitly state the cost of the subscription and the frequency of the billing cycle. When free trials are involved, developers will also have to add how long it will last, what it will cost when it's converted, what's included with the free trial, and how a user can cancel if they don't want to be converted to a paid subscriber. Long story short: Apps that just say "click here for a free 3-day trial" aren't okay anymore. 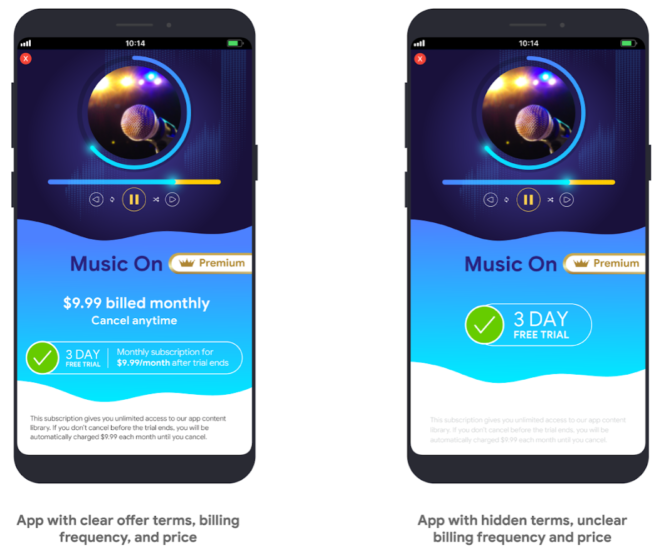 If you still don't pay attention to these detailed descriptions when you sign up for a trial, Google added another safety net. Before a free trial or your introduction price ends, you'll get an email warning that you'll be charged going forward. The same is true for people who subscribe to 3-month, 6-month, or annual plans — they'll be notified when their renewal is coming up. Google also announced another game changer: "We notify active subscribers who uninstall the app that uninstalling does not automatically unsubscribe them from the service."

While developers might lose some customers in the short term, the changes are more than welcome for consumers and should reduce the risk of getting scammed on the Play Store. Previously, you'd have to remember to cancel subscriptions yourself, but Google's email reminders and uninstall notifications should help you stay on top of where your money goes before it's too late. It's just a bummer that it took so long to implement these policy changes — these protections should have been in place from the get-go, and could've saved a lot of people a ton of money.

Android historically hasn't been great at protecting your privacy, but recent releases of the OS changed that — Android 9 introduced more granular phone permissions, and Android 10 lets you prevent apps from getting your location while they're in the background. Android 11 is slated to step up that game and will only allow background location access to apps whitelisted by Google, as announced in February.

The policy is now live, and developers can familiarize themselves with the changes before they go into effect November 2020 (or August 2020 for brand-new apps). To get access to background location, they have to submit their app to Google and lay out clearly why their product needs constant access — advertising or analytics aren't okay as the sole purpose. They also need to add prominent disclosures to their apps, explaining to users what they use the data for. (Conveniently, pre-installed apps don't have to do that.)

Google also updated its policies around deceptive content and apps to emphasize that applications "are clear about their behavior once downloaded and to prevent any manipulated content (i.e. “deepfakes”) are available on the Play Store."