Behaviour Interactive has announced that its asymmetric survival horror game Dead by Daylight is coming to Android and iOS before the end of 2019. It will be a free release, and the beta will land in select regions before the official worldwide launch.

The trailer above shows off a few seconds of gameplay at the tail end, though it's conspicuously provided in a small window instead of fullscreen. If you look closely, you'll notice many low res textures and blocky graphics. While I suppose a loss in graphical fidelity isn't unexpected for a mobile port, it's also not that surprising since the PC and console releases are known for their poor optimization. Of course, this is just an early promotional trailer, and the graphics may improve as development moves forward, though I do have to question why a developer would willingly announce a game while shying away from showing how it plays or looks. Luckily the devs will provide a gameplay live stream on June 26th, for those that would like to take a closer look.

Behaviour Interactive has made it clear that the mobile port of Dead by Daylight will retain the core 4-vs-1 asymmetrical survival horror gameplay of the PC and console releases, but it would appear that a few UI elements have been adjusted to better suit touchscreen play. The title will land on the Play Store as a free release, but so far no monetization details have been provided. We do know that users will have to play on a device that supports Android 7 or later and that the recommended hardware for our platform is a Galaxy S7 or its equivalent.

As we move closer to the beta and the official release of Dead by Daylight on Android I'm sure more details will crop up. If you'd like to pre-register for the title to ensure that Behaviour Interactive's newsletters and promotions won't pass you by, you can sign-up on the official website linked as the source below. 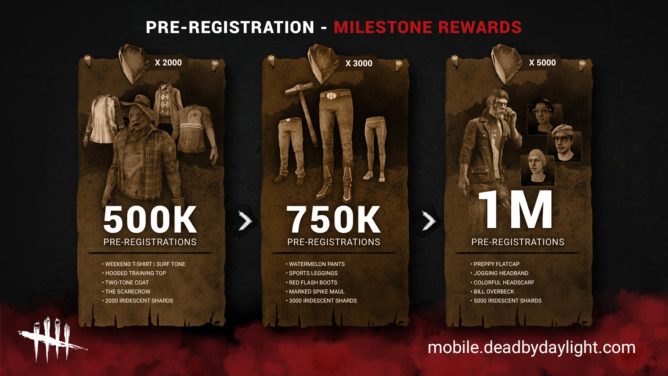 As everyone can see, Dead by Daylight Mobile never made its way to Android before the end of 2019, but that doesn't mean the game still isn't coming. Behaviour Interactive has just revealed that Dead by Daylight Mobile will be officially released on Android this spring. Sadly the developer did not offer anything more specific, which means an exact date of release is still unknown.

Today's announcement also marks the beginning of the game's pre-registration campaign on the Google Play Store, though it would appear that someone forgot to actually turn on the pre-reg button. Hopefully, this will be addressed in short order. Up until today, fans only had the option to pre-register on the official Dead by Daylight Mobile website, so once the Play Store pre-registration listing is live, those that would like to sign up will have a chance to earn a few in-game rewards, such as unique outfits and weapons. Like most pre-registration campaigns, there are separate reward tiers that will unlock as the pre-reg numbers grow.

Montreal, Canada—February 27, 2020—Leading global independent development studio Behaviour Interactive today announced that Dead by Daylight Mobile will release in Spring 2020 in the Americas and EMEA. Today marks the launch of the game’s Google Play pre-registration campaign. Behaviour also confirmed its partnership with NetEase Games, who will act as the publisher for the asymmetrical multiplayer horror game in Japan, South Korea, and Southeast Asia.

Dead by Daylight is a 4v1 multiplayer horror game in which one crazed killer hunts four friends through a terrifying nightmare. In a deadly game of cat and mouse, players can take on the role of iconic killers or try to survive brutal trials. The game has over 15 million players worldwide on PC and consoles. Dead by Daylight Mobile will be fully optimized and offer the same gameplay and modes that fans enjoy, with new controls and experience carefully crafted for mobile devices.

“Our fans have been eager for the launch of this title since we first announced it and we’re happy to say our early adopters will be rewarded for their support and dedication. We’re delivering a fully-fledged and definitive product on iOS and Android devices and fans can expect complete support and great content for a long time to come.” said Mathieu Côté, Game Director.

Players who sign up for Dead by Daylight Mobile pre-registration will work towards the following in-game rewards:

Android users in the Americas and EMEA can pre-register here and iOS users can continue to pre-register on the website.

The game will be made available to these territories following a different timeline due to distinct optimization and localization processes NetEase Games will unveil more details later this year. To get the latest news and updates, players can follow NetEase Games on Facebook and Twitter.

About Dead by Daylight™ Mobile

Dead by Daylight Mobile is a fully-fledged mobile iteration to the fan-favorite asymmetrical multiplayer horror game from Behaviour™ Interactive, which has now surpassed 15 million players on PC and consoles. In Dead by Daylight Mobile, five players jump into a match where one plays as a crazed killer and must hunt four survivors on a terrifying map. Players take on the role of both killer and survivors in a deadly game of hide and seek. Dead by Daylight™ Mobile will be available on the App Store and Google Play Store. For more information, please visit mobile.deadbydaylight.com.

NetEase Games is the online games division of NetEase, Inc. (NASDAQ: NTES), developing and operating some of the most popular PC-client and mobile games in markets including China and Japan. As one of the world’s largest incubators of quality online game content, NetEase Games is dedicated to supporting the growth of innovative studios around the globe and growing an international presence along the way. To complement its self-developed games and world-class R&D capabilities, NetEase Games also partners with other industry leaders including Blizzard Entertainment, Mojang AB (a Microsoft subsidiary) and other global game developers to operate some of the most popular international online games in China. For more information, please visit neteasegames.com.

Behaviour Interactive, Canada’s largest independent game developer and publisher, was founded in 1992. The company boasts over 600 employees in its Montreal studio and more than 200 million downloads. With its award-winning original IP Dead by Daylight™ and the upcoming strategy RPG Game of Thrones Beyond the Wall™, Behaviour continues to grow as a leading global developer. Behaviour counts amongst its partners some of the world’s most renowned brands including Activision, Microsoft, Nintendo, Sony, Ubisoft and many more. For more information visit: bhvr.com.

Dead by Daylight Mobile will land on Android on April 16th

Behaviour Interactive just published a new trailer for its asymmetrical survival horror game Dead by Daylight, and this video reveals that the mobile version of the game will be coming to Android on April 16th. Of course, last month, the dev made it a point to announce that the game would arrive sometime in spring while not mentioning a specific date, which is precisely what left the company open to make an announcement today to spike interest.

See you at 3pm EDT! Join us in Twitch chat after the broadcast for a Q&A with the #DbDMobile devs. pic.twitter.com/6bOiNdWfef

Coincidentally it would appear that the Dead by Daylight Mobile Twitter team has announced that public a broadcast covering the game is set to air at 3 pm EDT, which will be available to watch on Twitch, YouTube, and Facebook. It's my guess that this is where Behaviour Interactive will officially announce the release date for Dead by Daylight Mobile since the YouTube video above was most-likely published a little early.

Dead by Daylight Mobile is officially available on Android

Last month we learned that Behaviour Interactive's mobile port for Dead by Daylight would arrive on Android on April 16th, and the dev has stayed true to its word. This means you pick up Dead by Daylight Mobile today, and since it's a free-to-play release, you can do so without spending a dime. Of course, the fact that the game is free-to-play means there is plenty of in-app purchases included with the title, and these range up to $99.99 per item.

So far, Play Store reviews are middling around the 4.0 mark, with many mentioning bugs and glitches, an issue for the game on all platforms, so no surprise they made their way to mobile. Luckily, the majority of bugs aren't game-breaking, and so Dead by Daylight is still an enjoyable asymmetric survival horror game that's a blast to play with a few friends despite the clear lack of polish. So if you'd like to check it out for yourself to make up your own mind, feel free to grab the install from the Play Store widget at the bottom of the page.