After months of hype and more than a few leaks, OnePlus finally unveiled its latest smartphones at a live-streamed online-only event today. The OnePlus 8 and 8 Pro are the company’s most advanced ever phones, with the Pro model introducing a couple of long-awaited features in wireless charging and an IP rating.

We’ve already seen considerable price hikes across the board for phones with Qualcomm’s newest flagship SoC, the Snapdragon 865, and OnePlus can’t escape this either. Whether you intend to use 5G or not, you’re going to have to pay for hardware that supports it, and that means a starting price of $699 for the OnePlus 8 and $899 for the 8 Pro. It’s also worth noting that mmWave 5G is not supported here. Those are high prices compared to previous OnePlus phones, but they are still competitive in the wide market compared with phones that use the same chipset, at least.

The headline addition is insanely fast 30W wireless charging, which is basically as fast as it does wired, although you’ll need to buy the proprietary Warp Charge 30 Wireless Charger or make do with slower Qi charging with existing accessories. Another oft-requested feature is an official ingress protection rating, and OnePlus has eventually obliged with IP68 certification that puts it on a par with every other premium flagship. The camera setup is also an improvement over the OnePlus 7T Pro, with a 48MP (Sony IMX689) main sensor, a 48MP 120-degree ultra-wide (this sensor was the primary on the last-gen Pro), and an 8MP telephoto that does 3x optical or 30x digital zoom. There’s also a 5MP color filter camera of dubious utility.

While the rear design is in line with the past couple of generations of OnePlus phones, the front is unchartered territory. Gone is the pop-up selfie cam and uninterrupted display, replaced by a small punch-hole cutout this time. The screen itself is still beautiful and still massive — the bright QHD+ AMOLED panel measures 6.78-inches diagonally and ups the refresh rate 120Hz. Motion smoothing (MEMC) algorithms are another new inclusion. Fast and smooth performance is a given on a OnePlus phone by now, and the 8 Pro comes with either 8 or 12GB of LPDDR5 RAM and at least 128GB of UFS3.0+ storage to ensure that’s the case. Dolby Atmos dual stereo speakers are onboard for audio excellence, and there’s a new vibration motor for improved haptics. 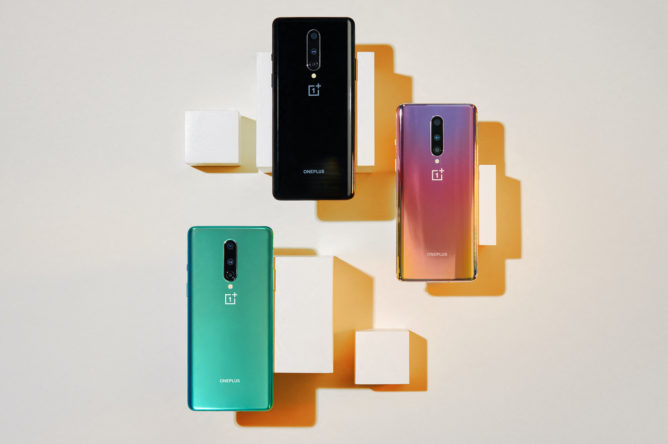 The cheaper OnePlus 8 starts at a more reasonable $699, but that’s still $100 more than the 7T. For the extra money, you get the Snapdragon 865 SoC and 5G, but no wireless charging or IP rating like the Pro model. The telephoto lens that the 7T sported has also been replaced by a less useful macro lens, even though the ultra-wide was already capable of taking macro shots before.

It may miss the big features of the more expensive model, but the OnePlus 8 is still a lot of phone for the money, in spite of 5G-related price hike. The AMOLED display isn’t that much smaller at 6.55-inches, but it’s only 1080p and only goes up to 90Hz, like its predecessor. Other differences include slower LPDDR4X RAM, a slightly smaller battery, and no Comfort Tone ambient color adaptation for the display. 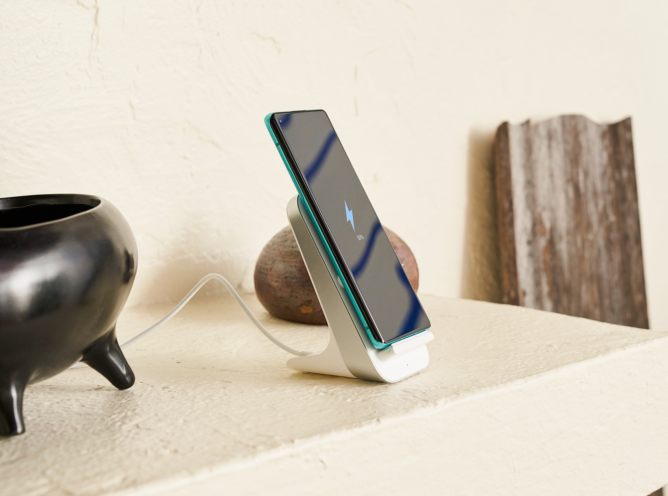 At the same event, OnePlus also unveiled a cheaper version of its wireless earbuds the Bullets Wireless Z. They cost $50 (£69) and come in black, blue, mint and oat colors. They offer 10 hours playback from 10 minutes charging or 20 hours from a full tank. The aforementioned Warp Charge 30 Wireless Charger (above) will cost $70 (£69).

The OnePlus 8 Pro and its wireless charger support normal Qi charging, too