At the start of April, Samsung introduced a buyback program for its Galaxy S20 phones to encourage people to 'rent' a phone for 2 years at half the retail price. Now, the company is making another bid to attract upgrades by adjusting its top trade-in valuations for Apple, Google, and its own phones. The main takeaway for direct buyers? If you're giving up an older iPhone or Galaxy, you're likely getting a better deal.

When Samsung initially appraised trade-ins for the S20 series in the lead-up to its launch, it heavily favored those looking to switch away newer phones like the S10, iPhone 11, and Pixel 4. But with flagging sales reportedly weighing on the company's bottom line, it seemingly decided to flip the tables, targeting people with aging devices instead.

Almost every phone recently accepted for trade-in is still eligible under the new valuation guidelines. The only ones out of luck, though, are iPhone 6 owners — the 5-year-old model is the sole exclusion.

Here are the updated trade-in maximums along with the changes in value from the last update:

Samsung is also currently accepting devices with cracked-in screens for a limited penalty on trade-in value: a damaged Note10 will still garner a $400 credit while a roughed-up Galaxy S7 will get you $250 off an S20. 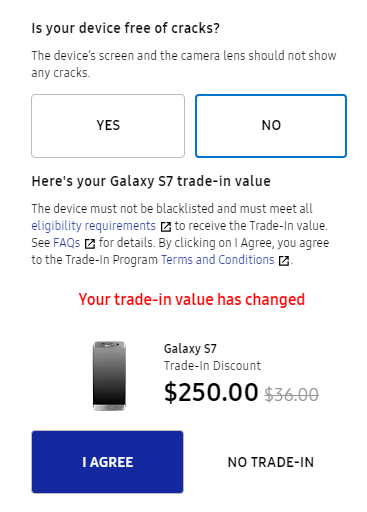 Don't be surprised, however, if the company manages to bungle up your credits. It's happened before.

Chromebooks will now install some web apps from the Play Store, instead of their Android versions