Chrome Unboxed first reported a few days ago that installing Twitter from the Play Store on a Chromebook will now set up the Progressive Web App (e.g. the Twitter site that runs in its own window), instead of the usual Android application. Twitter is perhaps one of the best examples of a PWA, since it looks and feels almost exactly like the mobile app ⁠— though support for multiple accounts is still lacking. 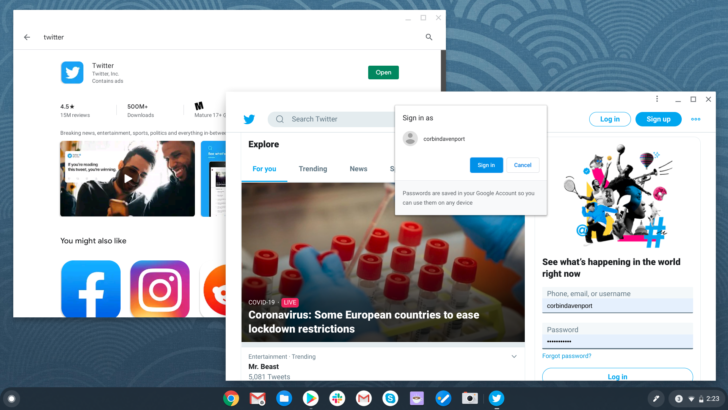 Installing Twitter on a Chromebook will now install the PWA

Dominick Ng, a software engineer on the Chrome OS team, later confirmed that the Play Store listing for YouTube TV now works the same way — instead of installing the Android app, it will add the YouTube TV web app to the Chrome OS shelf.

While I'm hesitant to give Google credit for solving a problem it created by having multiple app ecosystems on the same platform, this is definitely a smart move. As the Chrome Web Store has largely been discontinued for distributing apps, the Play Store is now the primary avenue for discovering software on Chromebooks. Starting with Twitter and YouTube TV, the Play Store will now install the best possible version of a given app without any work from the user.

This also appears to be completely unrelated to Trusted Web Activities, a method Google first released a year ago for developers to publish their Progressive Web Apps to the Play Store. TWAs are still installed to the device as APKs (albeit ones that contain little more than app icons), with at least some amount of Java code to handle app shortcuts and other features, while this new Play Store feature installs the PWAs on the host Chrome OS system. Also, the PWAs can't be uninstalled from the Play Store, only through Chrome OS.

Unfortunately, Google seems to be testing this functionality with a limited subset of apps right now. There's no public-facing setting yet in the Play Console to configure this behavior (at least, not one I could find), but perhaps Google will open this up to all developers soon.