We only recently got an upgraded pair of Galaxy Buds+ from Samsung, at the same time as the Galaxy S20 series was launched, and they offer superior battery life and improved sound in a practically identical form factor. If a new report from WinFuture is to be believed, Samsung's next-generation true wireless earbuds could introduce a new design the like of which we've not seen before.

Using leaked information, WinFuture has put together some renders of upcoming Galaxy Buds which are unsurprisingly code-named "beans" — previous versions have been referred to as "popcorn" internally. The kidney-shaped earbuds are apparently around 2.8cm in length, with a speaker hole and sensor in the part that sits closest to your ear canal and microphones and vents on the outside. Magnetic pin connectors for charging are also to be found on the side that sits against the ear.

The model number SM-R180 has been assigned to the new product, which we're all hoping will be called the Galaxy Beans. Information on battery size and other specifications aren't yet known. While they seem like an improbable proposition due to their bizarre shape — they just don't look like they'd stay in your ear very well — Samsung is apparently already in the testing phase of development. 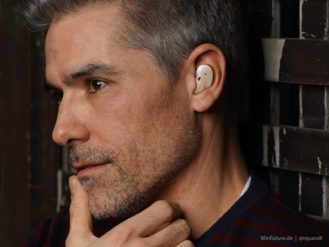 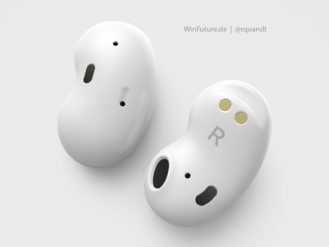 Much could change before they come to market, and they could even be canceled entirely, but it looks like this is something the South Korean company is serious about. More leaks are likely to shed more light, but if they do end up being released, we can probably expect them to launch alongside the Note20 at the earliest. Now I'm really craving some baked beans — thanks, Samsung.

According to a report from South Korean m-i.kr (via SamMobile), Samsung's cool 'Beans' will feature Active Noise Cancelation, offer 11 hours of battery life, and cost 170,000 won ($140 approx). That price is questionable, as it's unlikely Samsung would cannibalize its Buds+ series unless it plans to lower their price.

Each bean will have two speakers and three microphones, measure 28 x 13 mm (1.1" x 0.51") though Samsung is still trying to make it smaller, and the charging case is 26mm thick (1"). They'll supposedly launch alongside the Note20 and be produced in limited quantity at first.