Despite the coronavirus pandemic, which already forced some schedule adjustments on Google developers, the company has launched Chrome OS 81 to the stable channel. The latest release packs a new gesture navigation for the tablet mode and adds picture-in-picture support for Android apps. It also shrinks the taskbar ever so slightly to give you more screen real estate.

The new gesture navigation feels like a hybrid between Android 10's and the iPad's gesture systems. The first thing you'll notice after entering the tablet mode is the omission of the previously always-visible taskbar (officially called "Quick shelf") in favor of a pill that suggests swiping actions from the bottom of your screen. If you want to see your Quick shelf, swipe up just a little bit and hold until it's visible.

To go to your home screen, quickly swipe up from the bottom of the screen. If you want to enter the multitasking view, you need to swipe up, too, but hold your finger for a bit until you can see the overview of your apps. There's also an Android 10-like back gesture from the left side of the display. It works in browser windows as well as web and Android apps, though it doesn't seem to be functional when you use Linux applications like GIMP.

The upcoming Lenovo Chromebook Duet will also be the first tablet to take advantage of a browser window redesign that brings it on-par with Chrome for Android. Other Chromebooks will get the new UI later. 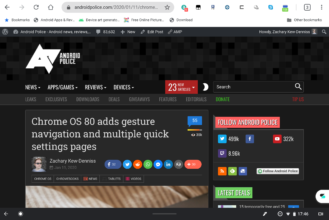 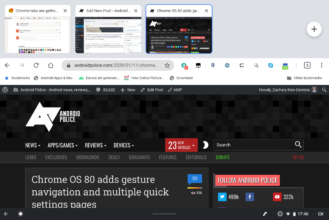 The new tab interface will soon come to all Chromebooks.

Picture-in-picture support has already been available in the Chrome OS 81 beta, and now anyone on the stable channel can take advantage of it. Apps like Netflix that support PIP on Android will automatically utilize that API on Chrome OS, too. 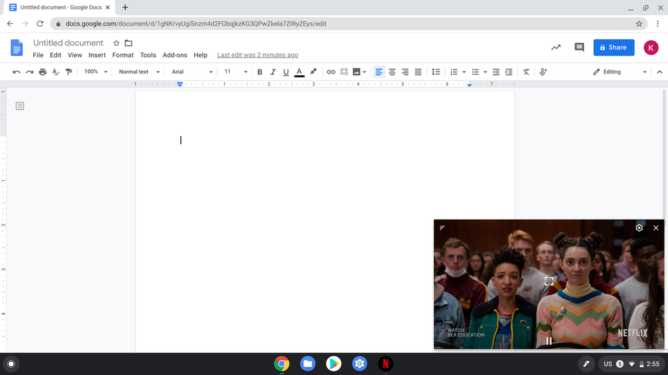 Netflix in PIP mode, helping you binge while you work.

As always, the update is rolling out over the air. You can head to your Chromebook's "About Chrome OS" settings and click "check for updates" to see if version 81 is already available to you.

As first spotted by Chrome Unboxed, the Chrome OS 81 rollout has been halted due to a few significant issues, just like version 80 before it. A Crostini bug that leads to busted containers might make using Linux apps insecure, and tapping or clicking the "what's new" notification after the update crashes some systems. Chrome Unboxed also says some USB-C devices aren't recognized by the system any longer. Hopefully, Google fixes the problems quickly and will resume the rollout soon.

Even emoji are being delayed because of coronavirus 😷