The leak matches earlier renders that already allowed us to see the exterior of the phone. A punch-hole front camera is embedded into the display's top left corner, making the phone's bezels smaller than the Pixel 4's. On the left side, you can find the familiar power and volume buttons. While we can't see them in the images themselves, there should also be a headphone jack up top and a USB-C port on the bottom.

On the back, a fingerprint reader sits in the index finger's natural resting position, and the camera bump has grown to a Pixel 4/iPhone Xs-esque size, despite offering only one lens. The rear also looks abhorrently greasy and dirty, so let's hope the owner just isn't the tidiest person — otherwise, I'm getting flashbacks to the Nexus 5's comfortable but hard-to-clean soft-touch back. The leak also shows off Google's familiar fabric case, though it looks like the Google logo on it is now black as opposed to gray in the past. The cutouts on the top and bottom for the headphone jack and the USB-C port seem to have shrunken, helping protect the phone better.

Since this leak only brings us images, there is not a lot to report on the hardware side. We can assume that the model depicted here comes with 64GB of on-board storage, though, as the image of the settings screen reveals.

However, a few things are off with these images. For one, there's a pretty huge indicator that they have been messed with in post-processing: the left edge of the display isn't a straight line in one image. For another, there are compression artifacts sprinkled around different elements in the photos, which could mean that they have been edited. These could also be there due to the high compression, so we can't reliably say how legitimate the material is.

It also strikes me as odd that there's no clock and only a sole back button in some of the photographed screens. That's a variation you usually only see during a Pixel's initial setup, and even then, the Pixel 4a would likely come with full gesture navigation out of the box, as the Pixel 4 also doesn't let you use 2-button navigation any longer. I can't quite think of a logical reason why the sole back button should be there, which makes the material even sketchier.

Maybe we'll see a more substantial, higher-resolution glimpse at the phone before the announcement — after all, there were some full hands-on videos of the Pixel 4 ahead of its launch.

Private Facebook groups strike again, this time with a picture of the Pixel 4a's retail box (via Slashleaks). There's nothing new here, but it confirms the shape of the rear camera element. You can also glean the fingerprint sensor under the nylon bag crease, and see that it follows Google's signature design language for retail boxes. 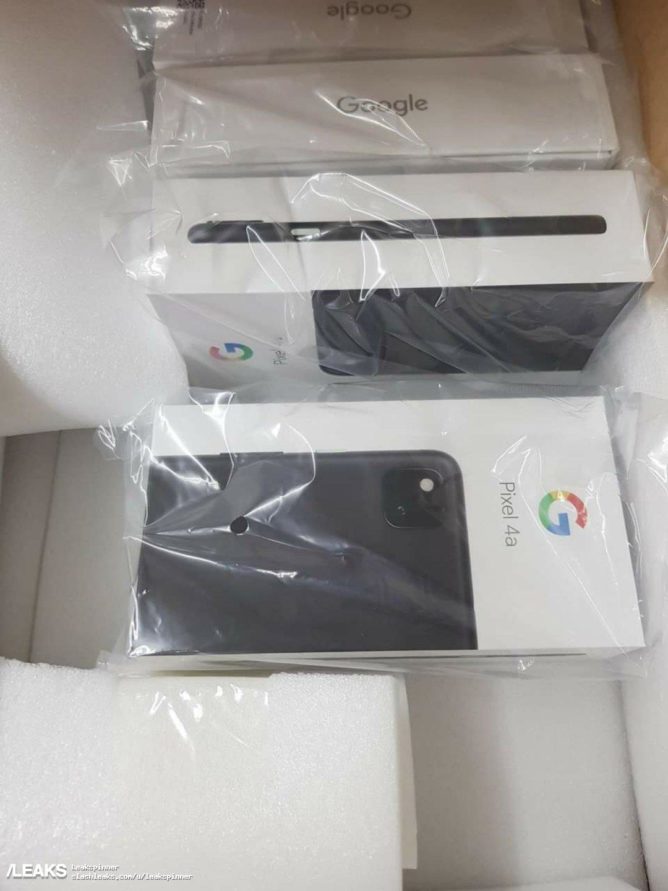