As OnePlus handsets have gradually moved up the pricing ladder, buyers have become less forgiving of several premium features that the company conveniently skips out on — including a proper IP rating and wireless charging. Both these sore points will be addressed with OnePlus’ upcoming 8 series according to India-based tipster Ishan Agarwal, who also detailed some of the key specifications of the lineup earlier this month.

Agarwal tweeted a pair of spec sheets for the OnePlus 8 and 8 Pro giving away some new information about the two highly-anticipated handsets. Apparently, only the Pro model will get the IP68 rating and support 30W wireless and 3W reverse wireless charging. The standard OnePlus 8 will be much closer to the current 7T. The higher-end phone will also use a 120Hz panel versus 90Hz on the 8, along with the newer LPDDR5 RAM standard. Both will also start at 8GB of RAM.

Both handsets will ship with the same 30-watt Warp Charge brick that came with the 2019 models and will use the older UFS 3.0 memory chip. The newer 3.1 standard offers improved write speeds. Additionally, the spec sheet suggests four rear cameras for the Pro, including two with a 48MP sensor. The non-Pro device gets three rear cameras. Both phones will reportedly see a jump of almost 500mAh in battery capacity compared to their respective predecessors. They will ship in a new green shade, which separately leaked earlier today. Popular leaker Steve H.McFly (@OnLeaks) released an alleged press render of the OnePlus 8 Pro in a refreshing green shade. Other than the color, there is nothing new in this image — McFly also leaked similar renders of the Pro back in October. They look identical, except for the new OnePlus branding. 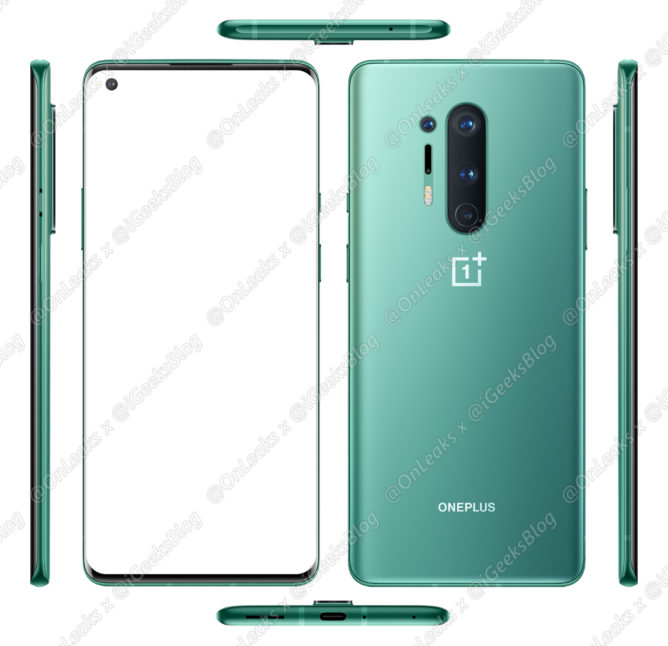 OnePlus was also expected to launch a Lite model in 2020, but some previous reports suggest the phone is delayed. The last time we heard about the OnePlus 8 series’ availability, reports suggested that the Chinese company could unveil them around mid-April.

A few more details about the OnePlus 8 Pro have been leaked. PriceBaba (working with leaker Ishan Agarwal) revealed that the phone's camera array will have two 48MP main sensors, one of which uses the Sony IMX689 sensor (f/1.78) found on the Oppo Find X2 Pro, while the other uses the same Sony IMX586 as the OnePlus 7T and 7T Pro's main cameras. The latter 48MP camera will function as the ultra-wide lens, with a 120-degree FOV and an f/2.2 aperture.

The 8MP telephoto lens will reportedly offer 3x optical zoom (with 30x digital zoom, which I'm sure will barely resemble a photo), and the 5MP sensor will only function as a color filter. OnePlus is also reportedly working on an all-new night portrait mode, '3-HDR' video, and improved image stabilization.

WinFuture offers us a glimpse at another new OnePlus 8 Pro color variant called "Ultramarine Blue." It's a deep, saturated shade of blue quite reminiscent of the "Really Blue" original Google Pixel. If the leak turns out to be accurate, OnePlus will truly offer a broad selection of attractive colors this time around. WinFuture confirms the previously leaked hardware specifications courtesy of Ishan Agarwal. The German outlet further adds that both the OnePlus 8 and OnePlus 8 Pro should support 4K 60fps filming, as well as a 720p 480fps super slow-motion mode. Both handsets additionally have NFC and dual-nano-SIM support on board.

Alternate title: A bunch of watermarks leak with a OnePlus phone underneath

The Samsung Galaxy Fold is finally getting Android 10 (Update: Now in US)