According to a change recently made to Google's Vendor Test Suite (VTS) spotted by our friends at XDA Developers, Google will require that all devices launching with Android 11 support seamless updates. More specifically, the VTS will check that devices running Android 11 and later support virtual A/B partition structures (which allow seamless updates), and fail if that support isn't present. Since devices must pass the VTS to ship with Google's apps, that effectively means that Android manufacturers will have to support seamless updates on devices that launch with Android 11.

This is pretty technical, but it's a big deal. Although the A/B partition structure and seamless updates date back to 2016, not all Android manufacturers have implemented it, even though the benefits are substantial. In addition to providing the convenience of background/seamless system updates, which let the phone install patches and even major updates while you're still actively using it, it also protects devices if that process goes wrong or fails. With two system images, there's always a backup available if something happens to one of them, and the system can easily roll back by just booting to the other partition. Things can go wrong during the update process, if devices are accidentally powered off or something unexpected happens, and this redundancy is much safer for customers. It's the same sort of structure that Chromebooks use to keep updates from causing problems.

Outside safety, it's also just convenient. When you have to install updates the long way, that means a device spends minutes sitting in recovery, slowly flashing an update. With monthly security patches, and with devices sometimes taking 15+ minutes to install those updates, that can make a dent in your phone's usability if you do it at the wrong time.

Although many OEMs like OnePlus, LG, HTC, Motorola, Google, ASUS, and Sony have implemented A/B partition systems/seamless updates, big names like Samsung and Huawei still haven't, even for some of their most expensive flagship devices. Despite the clear benefits to consumers, even the $1,400 Galaxy S20 Ultra doesn't support the four-year-old feature. 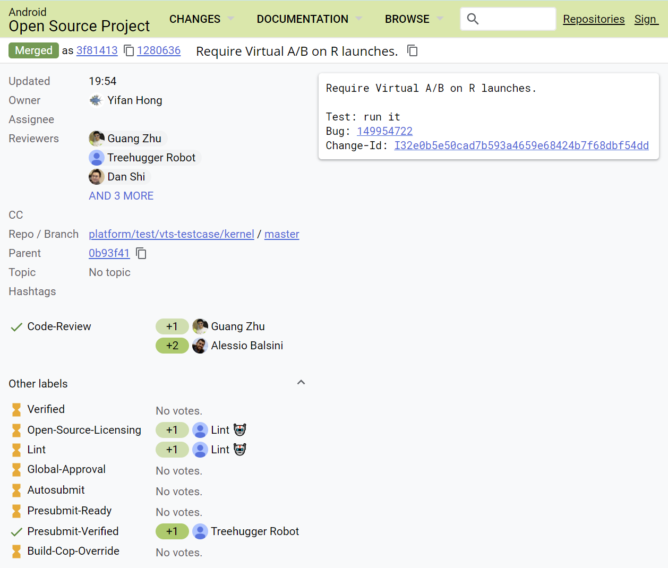 Previously, Google only strongly recommended A/B partitions as part of its CDD, but given the VTS changes spotted in the AOSP Gerrit commit, the company has at least decided that it wants the feature on devices that get its Google Apps blessing, starting with those that launch with Android R/11. That gives manufacturers like Samsung and Huawei a little less than a year to get their act together or dump Google's apps, which isn't going to happen. Samsung's 2021 Galaxy S flagship will have to support seamless updates (finally).