How are you going to call yourself a smart-home company, one with a huge focus on video, and not have a video doorbell? That's a question Arlo had no doubt been asking itself for some time, and while it launched its Audio Doorbell with matching wireless Chime back in 2018, that one was largely meant to be used with the company's existing video cameras. It took another year for the follow-up effort to arrive, but in late 2019 we finally got a proper Arlo Video Doorbell.

How will this new entry compare against Arlo's existing lineup of impressive cameras? What about video doorbells from other smart-home manufacturers? And is this going to be an easy upgrade for you, or should you think about calling an electrician? Let's get right into what the Arlo Video Doorbell has to offer:

The design of the Arlo Video Doorbell should be pretty familiar to anyone with even a passing interest in smart doorbells — if you’ve seen a Nest Hello, the Video Doorbell is going to look like its spitting image. That means a wide-angle camera up top, and a big illuminated button below — just like with Arlo’s Audio Doorbell, that button lights up when the unit detects motion to clue users in as to where to press. 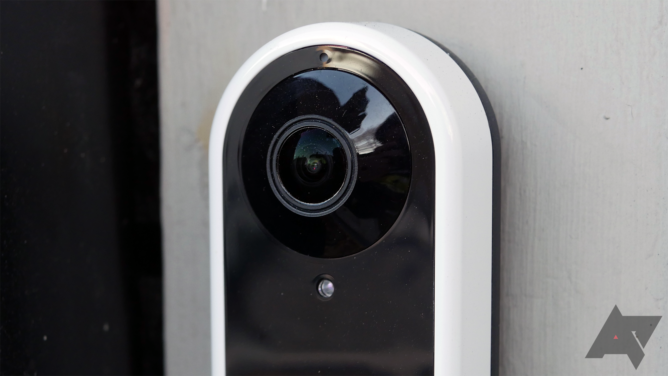 The wide-angle camera sees a lot but misses packages directly underneath.

Unlike some other Arlo hardware, the Video Doorbell works all by itself, so there’s no hub included here, nor do you need to pick one up on your own.

The Doorbell comes with plenty of mounting hardware, including a bracket you screw into the wall where your old doorbell went, an adapter for mounting at an angle (in case your doorbell isn’t directly adjacent to your door), screws, optional anchors, and wire extensions in case they're needed.

The other main piece of kit here is a power adapter that connects to your doorbell’s chime wiring. In contrast with the Arlo Audio Doorbell, which had a full-wireless option, the Video Doorbell requires connection to a wired doorbell system for power. 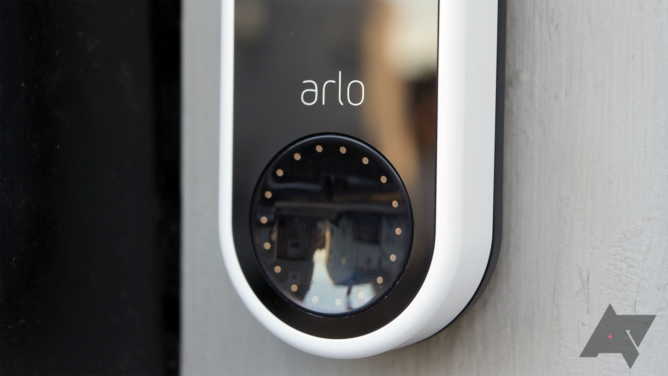 The Video Doorbell illuminates its button in response to sensing motion.

While the requirement to attach the Arlo Video Doorbell to a wired system makes setup quite complicated if you’re starting from scratch — and in which case, this goes from an easy DIY project to one that might benefit from a professional's touch — upgrading an existing wired doorbell is easy-peasy. 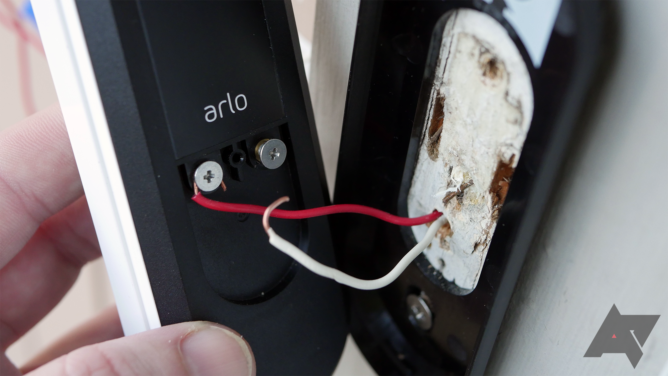 Assuming your existing doorbell wiring's in good shape, upgrading to the Arlo Video Doorbell is pretty straightforward — mount the bracket and wire it up.

After cutting the power and removing your old button you screw the new Arlo bracket to the door frame, attach the exposed wires, and click the Doorbell body in place — if and when you need to remove it, an included SIM-tool-like pin sticks in the bottom to disengage. Next you've got to install the tiny power adapter near where your doorbell chimes lives. Exactly how you’ll attach that depends on your current installation, but Arlo’s setup guide helps talk you through your options. 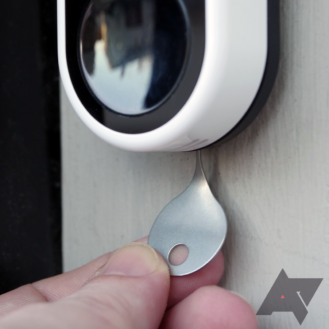 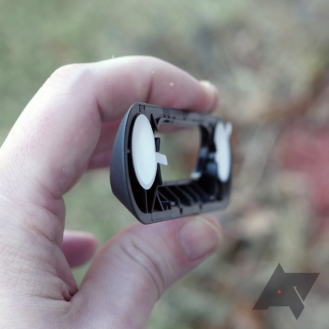 Left: Detaching the Doorbell with Arlo's impression of a SIM tool; Right: The optional angle bracket for mounting away from your door.

Now, full disclosure: I hit a pretty big snag, in that while my house clearly had a wired doorbell at some point, and I can see the existing wires teasing me, I wasn’t able to trace those anywhere nor find a transformer or chime. Luckily I managed to rig up a new transformer (which cost about $15-20) but elected to not bother with a chime. The Doorbell works just fine even without one, but doing this you’ll only get alerts on your phone when someone rings, and won’t hear any ding-dong in the house. I would love it if you could link this model to Arlo's own Chime, but that will only function alongside the Audio Doorbell — a curious if not unexpected limitation. 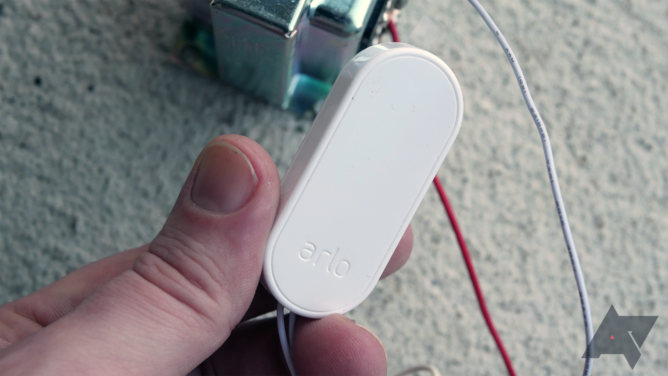 In any case, once everything’s wired up, restore power to your transformer and the Video Doorbell will be good to go. Setup with the app is nice and clean — give your Doorbell a name, scan a QR code from your phone, and you’re basically there.

The most interesting thing about the Video Doorbell’s operation is its unusual camera sensor. A widescreen camera doesn’t make a ton of sense with doorbell usage, so instead Arlo pairs a wide-angle lens with a square 1:1 sensor in 1538 x 1538 resolution. This offers a nice field of view, and while the resolution doesn’t go quite as high as other Arlo devices, it feels pretty sufficient for what the Doorbell does.

One slightly misleading detail is that Arlo advertises this as a 180-degree camera — with the caveat that it’s 180 degrees when measured across the diagonal. This means that the camera’s not going to see straight down, potentially missing packages right in front of your door. Testing my setup, I found that the camera's blind spot extends out about two feet from directly underneath.

The Video Doorbell comes with three months of Arlo Smart service, which in addition to recording camera clips to the cloud, identifies people, vehicles, animals, and packages. To my great disappointment, though, the Doorbell’s functionality is drastically reduced for users who choose not to maintain a subscription — since there’s no connection to an Arlo SmartHub for USB storage and no local microSD slot, it can’t record video at all, so all you get are motion alerts and the opportunity to watch the camera's live feed. 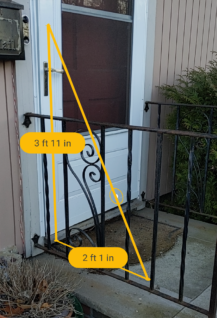 Arlo's far from alone in leaning so heavily on core functionality being tied to an ongoing subscription — Ring and Nest work quite similarly — but shared bad behavior is bad behavior all the same. I don't think it's too much to ask for either the option to connect to one of your company's own SmartHubs, or at least having on-device microSD support.

Another limitation is that unlike some of those other doorbells, Arlo's seems unwilling to share its feed through Google Home. While you can see the linked Video Doorbell among your Arlo devices in Home, and streaming regular Arlo wireless cams works fine, the Video Doorbell does not appear to share that same support.

Arlo users will see the Video Doorbell appear right alongside their existing cameras in the Arlo app's device listings — or if you're starting fresh, all by its lonesome. From there you can view a live feed or adjust the product's settings — those include assigning zones for motion activation, configuring HDR and night-vision options, and tweaking the Doorbell's audio (which is a little loud out-of-the-box).

With Arlo Smart, you'll also have access to your full library of cloud recordings, including notes about the video subject as detected by Arlo's AI processing.

When someone comes to your door and rings, you'll see it on your phone just like an incoming call. While this happens quite quickly, it's a little frustrating that you won't get any video (or even a still frame) until after you pick up. At that point you can talk to your guest through the Video Doorbell's speakerphone, deliver a canned response like "just leave the package" or "scram" (but a little nicer), or just ignore them — it's your prerogative whether you choose to engage at all. If you decline to answer, visitors can be prompted with the option to record a message for you. And if everything just goes to hell, you can trigger an ear-piercing siren that should send anyone running. 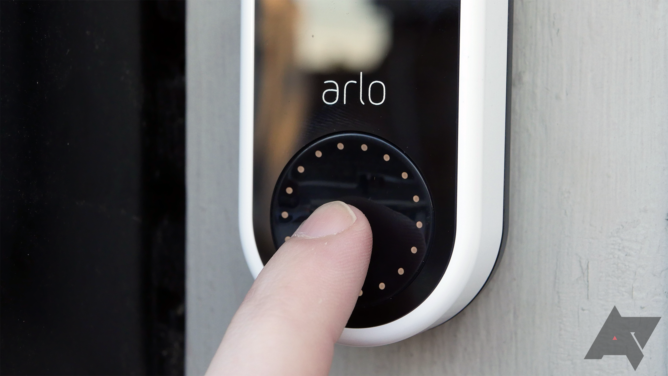 Arlo Video Doorbell
9/10
Yes. Compared to models like the $250 Ring Video Doorbell Pro or the $230 Nest Hello, the Arlo Video Doorbell delivers similar functionality at a substantially lower price: just $150. If you've got an existing smart doorbell you're looking to replace (say, if you're maybe reconsidering the company's security practices), Arlo's even offering a $50 rebate through the end of March. And as of the time of publication, both Amazon and Best Buy have the Video Doorbell for $20 off.

Of course, there are also long-term costs to consider, and you're basically stuck with needing Arlo Smart at a minimum of $3 a month — or $36 a year. That's very similar to Ring pricing, and quite a bit cheaper than the $5 minimum tier for Nest. Personally, I would gladly pay an extra $100 premium for an Arlo Video Doorbell with on-device AI (we shouldn't need the cloud to tell the difference between people, cars, and dogs) and local storage, but at some point I have to stop faulting Arlo for shifting its business model.

There's still room for improvement here, and I would kill for proper Assistant integration (there is the saving grace of Alexa support, for those in that ecosystem), but all in all this is a full-featured, competitively priced doorbell that compares favorably against the most popular models out there.

It's been a few months now since I first took a look at the Arlo Video Doorbell, and the honeymoon period is over; as the initial three-month Arlo Smart trial elapsed, a lot of functionality went away. I could still stream live footage through the app, and screen guests at my door, but without Arlo Smart there was no way at all to access recordings of motion events.

I knew this was coming, and had accepted it, but in the last few days that situation drastically changed, thanks to a new update to the Arlo app. While there are some general bugfixes and optimizations, this release delivers two key features that change the Video Doorbell experience: support for connecting to an Arlo SmartHub, and compatibility with the Arlo Chime.

Admittedly, the Chime support is a bit of a niche case. If you've already got a regular wired doorbell, you can just use its existing chime when upgrading to the Video Doorbell. But if you ever do find yourself in the situation I did, with wired power but no chime, support for the wireless Arlo Chime is a godsend.

But the bigger news is SmartHub support. Previously, the Video Doorbell got online through your Wi-Fi directly, while Arlo's family of wireless cameras connect through the SmartHub. That's important because for Arlo cameras that don't come with free cloud recording (those released after the Pro 2), you can still record locally by using a SmartHub's USB port to attach an external drive, and access those recordings through the app, without needing an ongoing Arlo Smart subscription.

Since the Video Doorbell had been operating independently of any SmartHub, there was no option to do local recording at all. Now, if you've got a supported SmartHub model, you can finally make that connection and start saving your recordings.

The only real hiccup here is that to get things working, you're going to have to remove the Video Doorbell from your account and set it up all over again — which means taking it down from its mount to access the reset switch between its power contacts. But after you sit through the setup process all over again, your Video Doorbell will be picking up some much-appreciated new functionality.

Finally, the Video Doorbell has managed to add the Assistant integration that had been missing. In light of what this update delivers, I'm bumping the Arlo Video Doorbell's review score up to a solid 9.0.

Firewalla review: A powerful solution to monitor and protect your home network (Update: 4 ...