While some of us spend very little time on the phone, it's still very important that we can make and respond to calls in the most intuitive ways possible. That might involve knowing where buttons are and what direction to swipe, what to look for on a screen, or how some things will react to gestures and button presses. The latest update to the Google Phone app reveals it's about to get a popular feature for muting call ringers by simply flipping the phone over.

It's safe to assume most of us get calls that we're not going to answer. Regardless of the reason, all that matters is stopping the disruption and getting back to what we're doing. Virtually all smartphone ringers can be muted by pressing volume buttons, and most OEMs have even implemented a basic flip-to-silence gesture reminiscent to the classic motion of setting a corded phone down to end a call. 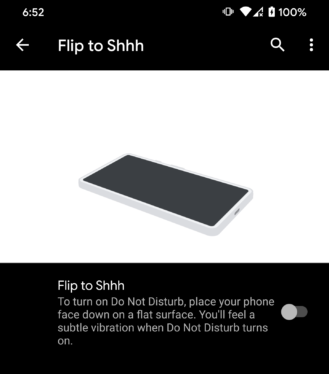 Google began testing a different implementation of this gesture with the Pixel 3 that took things a little further. Dubbed "Flip to Shhh," this version used the same gesture to switch the phone into Do Not Disturb (DND) mode . While DND settings may vary from one person to the next, this was generally less about muting a single call and more focused on shutting out all but the most critical notifications. This began as a Pixel 3 exclusive, but eventually expanded through Digital Wellbeing.

Now Google appears to be putting the more traditional Flip to Silence gesture into operation. New text and a basic settings screen have been included in the latest Google Phone update that describe how it works and a toggle to turn it on.

A label was also added for the Flip to Shhh feature, so it's clear the Phone app will link to the settings page provided by Digital Wellbeing. It looks like this will probably replace the Flip to Silence link if it's available or enabled. This probably isn't the perfect solution for those people that would like to allow all calls through DND mode while blocking regular notifications, but perhaps that will be implemented later.

I personally prefer Flip to Silence since I almost never want DND mode enabled, so it will probably be enabled on my phone.

Some tweaks are coming to the way we answer video calls. A new line indicates there will be an option to answer video calls so that only the caller's video feed is visible while you only share your audio. There's nothing yet to indicate what the caller will see — perhaps a mirror of their own video, a profile picture, or just a generic call screen.

This feature removes some of the urgency to answer a video call and possibly reveal your location or that it looks like you just woke up after a long crazy night. In all likelihood, it will be possible to switch into bidirectional video during the call, but that can happen on your own schedule.

Perhaps it's a coincidence, but two other lines were added that are meant to deal with connections that aren't up to the task of carrying the video signal. One is a button that manually downgrades from video chat to a regular audio-only call, and the other is a message that occurs if the connection is bad enough that the video signal simply fails. In practical terms, a 1-way video call would also fare better on limited bandwidth, so it's possible all three of these were added to account for a shakey connection.

Web Video Caster can stream videos from Android and iOS to your Chromecast, Roku, Apple TV, and ...

Weekend poll: Have you signed up for the Android Police newsletter?