Game of Thrones Beyond the Wall is a new collection-based strategy RPG that's coming to Android this summer, and it's already available on the Play Store for pre-registration. Player's will take command of the Night's Watch to defend Westeros by collecting notable characters that will be useful in the game's strategic battles. The story takes place a few decades before the timeline of the books and TV show, which means this upcoming release will serve as a prequel of sorts.

Like most pre-registration announcements, the trailer above doesn't actually show off any gameplay. Luckily there is a single screenshot on the Play Store that provides a look at the game's battlefield. Pictured below is a grid-based affair that looks very similar to Final Fantasy Tactics and X-COM, so I would imagine the core gameplay revolves around this chess-like RPG design. Of course, the goal of the game is to collect as many different variations of the show's characters as possible to form the ultimate team to battle with, a setup I'm sure most mobile gamers are more than familiar with. 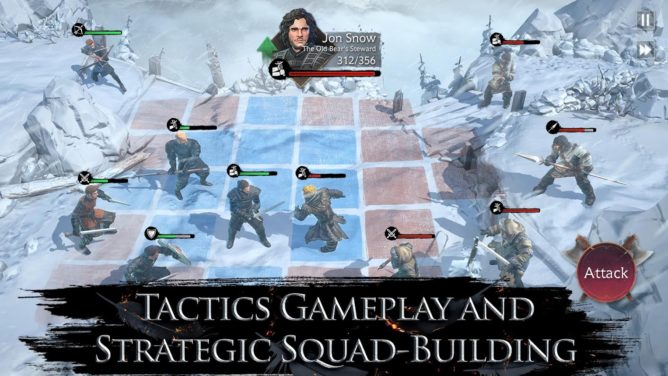 The story of Game of Thrones Beyond the Wall will explore the disappearance of Lord Commander Brynden Rivers (known as Bloodraven and the Three-Eyed Raven), and it will be the player's job to follow in his footsteps to discover the many mysteries that lie in wait beyond the wall.

So far, there's no word how Game of Thrones Beyond the Wall will be monetized, but since it's a collection-based game themed around an expensive license, it's probably safe to assume that it will be launched as a free-to-play title. If this sounds like something that would interest you, then make sure to pre-register for this strategic RPG through the widget at the bottom of the page as it will guarantee you some exclusive content when the game is officially released as well as a chance to participate in an upcoming closed beta.

June 26, 2019—Behaviour™ Interactive, GAEA and HBO are excited to announce Game of Thrones Beyond the Wall™, a new mobile collectible strategy RPG game based on the world’s most popular TV show. The game is planned for release in 2019 on the Google Play and the App Store. Players can pre-register on the official website (http://www.beyondthewall.bhvr.com) starting today.

In Game of Thrones Beyond the Wall™, players command a castle of the Night’s Watch to defend Westeros and recruit unique characters from around the Seven Kingdoms and beyond. The game’s original narrative is set a few decades before the timeline of the hit TV show, just after Lord Commander Brynden Rivers (also known as Bloodraven and eventually as the Three-Eyed Raven), disappeared while ranging beyond the Wall.

Players will also find an in-game interface that uses the mysterious powers of the Weirwood Trees to move through history and visit key moments in time. This feature allows players to collect different costumed versions of Jon Snow, Daenerys Targaryen, Jaime Lannister, Melisandre and Tormund Giantsbane across various game events and then use the characters in many gameplay modes, including combat - a first for a game in this genre.

“We have been fans of Game of Thrones since the beginning and are incredibly excited to deliver the epic scope of that world into the palm of player’s hands as an innovative strategy game,” said Wayne Meazza, Executive Vice President, Behaviour Interactive.

“From the beginning, we knew we wanted to bring something unique to Game of Thrones fans,” said Justin Jones, Creative Director, Behaviour Interactive. “We believe we’ve designed an experience that blends an original narrative, robust collection strategy and deep squad combat into a next-generation AAA game on mobile.”

“Now that the full televised story of Game Of Thrones is complete, we are excited to launch a new gaming experience which will offer fans a deeper interaction with their favorite show. Game Of Thrones Beyond the Wall™ will tell new stories, revisit old ones and expand the fan experience for anyone who’s not yet ready to leave Westeros behind.” said Jeff Peters, VP of Licensing & Retail, HBO.

“Here at GAEA, you can’t bring up Game of Thrones without triggering an exciting and sometimes intense discussion,” said Yann Wang, CEO, GAEA. “The development of Game of Thrones Beyond the Wall has been a challenging endeavor fueled by great passion from everyone involved. Using state-of-the-art technologies, we are very excited to bring to fans and gamers, this game adaptation of what may be the most popular show around the world.”

Fans can become Lord Commanders by signing up for pre-registration on Google Play, App Store or the official website here. Lord Commanders who pre-register will begin their watch with bonus characters and items (see site for details and restrictions.) Pre-registered Lord Commanders will also receive the latest game news, developer interviews and game updates through email.

About Behaviour Interactive
Founded in 1992, Montreal-based Behaviour Interactive is one of North America’s largest independent game developers with close to 500 employees and over 70 million games sold on every platform, including 10 million copies of its award-winning original IP Dead by Daylight™. To date, the company’s mobile games have reached over 200 million players worldwide. Behaviour counts amongst its partners some of the world’s most recognized brands such as Sony, Disney, Activision, Warner Bros, Ubisoft, Microsoft, Google, Bombardier, Wargaming, HBO, Netease, Gaea, La Capitale and many more. For more information: bhvr.com.
About HBO Licensing & Retail
HBO Licensing & Retail, a division of Home Box Office, Inc., partners with best-in-class licensees around the world to give HBO’s global audience new and exciting ways to engage with their favorite shows. The division leverages iconic, award-winning HBO programs such as Game of Thrones, VEEP, Sex and the City, Silicon Valley, Insecure, The Sopranos, Big Little Lies, True Blood and more to create officially licensed consumer products, innovative merchandise programs, retail activations and live immersive experiences. HBO Licensing & Retail works across a broad range of product categories, including collectibles, apparel, publishing, live branded experiences, digital gaming, fashion and beauty collaborations, luxury accessories and beyond. Officially licensed HBO merchandise can be purchased in retail stores around the world and online in the US at http://store.hbo.com.

About GAEA
GAEA is a global interactive entertainment company with offices in Beijing, San Francisco, Tokyo and Seoul. Founded in September 2014, the company has become one of the fastest growing companies in China, and excels in global game development, game distribution, IP cooperation, and M&A with over 1,000 employees from 12 countries and regions. GAEA has published over 20 games on multiple platforms with over 100 million players, including famous Chinese games Soul Clash and Ace of Arenas in various countries. The company is currently working with CD Projekt Red to publish GWENT: The Witcher Card Game in mainland China and also reinvents renowned IPs such as Kabaneri of the Iron Fortress, Final Fantasy XV and The Legend of Sword and Fairy. More information can be found at www.gaea.com.

Game of Thrones Beyond the Wall beta access is live 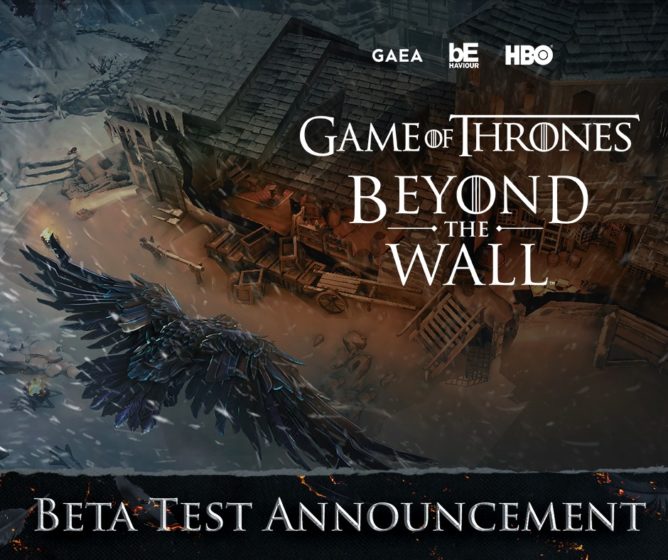 In a recent Facebook post made by the official Game of Thrones Beyond the Wall account, it has been announced that a beta test is currently available in Australia and New Zealand. The thing is, I can currently jump into this beta through the Play Store's tester sign-up page. After signing up, I was also able to install and play Game of Thrones Beyond the Wall successfully, and I'm not the only one. It would appear that those that live in the US can indeed jump into the current beta for Game of Thrones Beyond the Wall as long as they sign up for the beta through the Play Store, though I'm unsure how long this access will last. Just be warned that the game's in-app purchases are already live and that they range up to $99.99 per item. I'd also like to point out that if you are planning on playing this title whenever it's officially released, the servers will not be wiped. So whatever progress that's made during the beta will carry over after the official release.

We still don't know when Game of Thrones Beyond the Wall will be officially released, but the devs have made it clear that the title is still unfinished and that some designs may not be final, so I suppose there is still more work to be done. In the meantime, I plan on diving deeper into the beta to document what is currently there, so expect a hands-on from yours truly in the coming days. Of course, if you'd like to sign up for beta access to check out Game of Thrones Beyond the Wall for yourself, you can do so through the Play Store link at the bottom of the page..

It's been a couple of months since we last heard anything about Game of Thrones Beyond the Wall, a free-to-play strategy game that's slated to come to Android soon. While I can't say I was very impressed with the game after I went hands-on with the title this past January, I'm sure there's still more than a few eager fans out there that are ready to give this game a try.

The moment you have been waiting for, Lord Commander! Game of Thrones Beyond the Wall will be released worldwide on March 26th, 2020 on iOS devices and starting April 3rd, 2020 on Android devices. Pre-register now!#GameofThrones #GameofThronesBeyondtheWall pic.twitter.com/DIBh5iTcLP

Above, you can view a recent tweet sent out by the team behind Game of Thrones Beyond the Wall, and as you can see, the game will be officially released on Android on April 3rd, a week after the iOS release. So if you're eager to get your hands on the title, or would simply like to receive a notification the day it arrives, feel free to pre-register through the Play Store widget linked below this article.

Game of Thrones Beyond the Wall has arrived a day early

Last month the official Twitter account for Game of Thrones Beyond the Wall announced that the game would arrive on Android on April 3rd. Well, today may only be April 2nd, but it would appear that the free-to-play strategy game is officially available.

Notably, the top review on the Play Store states that the game is "money grab gacha garbage," with over 124 thumbs up that agree. Coincidentally, this was my exact takeaway when I went hands-on with the early-access release in January. Essentially, this is a tactical game that offers very few actual tactics, and despite the overused imagery of familiar characters, the story takes place well before the events of the TV Show, and so the characters everyone knows and loves are only playable when using a ridiculous time-travel mechanic. The game is poorly thought out, that much is clear, but if you'd like to see for yourself, you can grab the install from the Play Store widget at the bottom of the page.