Asus revealed its new flagship Chromebook at CES earlier this month, the Flip C436. Compared to the previous C434, it offers a thinner design, significant processor upgrades, and more storage. However, if you were hoping Asus would stay in the ~$550 price range, I have some bad news for you.

This places Asus in more direct competition with the Pixelbook/Pixelbook Go, as well as Samsung's upcoming Galaxy Chromebook. If you're interested, you can buy one from the links below.

Product listings for the C436 were taken down shortly after they went live, leading some to speculate that they had gone live too early. Asus recently confirmed to Chrome Unboxed that the C436 has been delayed to mid-March, so you'll have to wait a bit longer to buy the ultra-premium Chromebook.

Asus has finalized the release of this Chromebook. The C436 will launch on April 26, 2020. Pre-orders should be available again soon.

The Core i3 C436 is now available on ASUS' website. It costs $800, as expected, and seems to be shipping immediately. The other variants aren't live yet, but we'll let you know if we spot them before their slated release date. 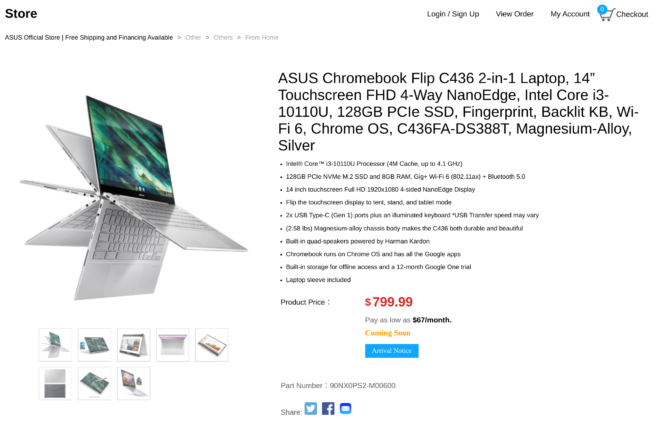 According to Chrome Unboxed, who reached out to ASUS, this listing was a mistake and shouldn't have gone live. It has since been removed, and we're back to the late April release date.