If you need a decent phone on a budget, or you're prone to rooting/ROMing, then we've got a great deal for you today. Woot is selling the OnePlus 6T right now for just $300. It's not the company's latest phone, daring back to late 2018, but it does pack aggressive (for the price) specs like a Snapdragon 845 and UFS 2.1-based storage.

The OnePlus 6T is a little on the older side, but it's not outdated. The phone is still getting updates, and though OnePlus charges less for its phones, the company does tend to include higher-end parts when it comes to things like chipsets and storage. You might not get Pixel-quality photos, but it should feel fast. OnePlus phones are also more developer/enthusiast-friendly, with an unlockable bootloader for rooting and installing custom ROMs — handy for when it does eventually stop getting updates, if you're up to the challenge. 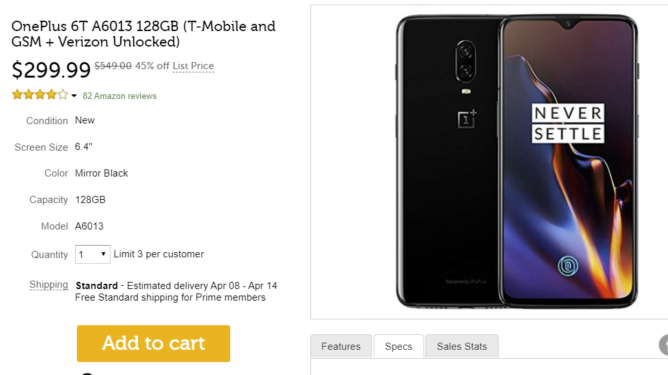 You can read our full review here, but in summary, it was a good phone. Though it lacks a headphone jack or an IP rating, OnePlus' software is among the best, though the 6T's Android 10 update had some issues. Battery life is also solid, it charges fast, and it had a good quality (if lower-resolution) screen.

Based on the "single SIM" detail in the listing, these are probably T-Mobile branded units, which means delayed updates, but they should still be unlocked for use on other carriers. With many of us trying to save cash right now, it's a decent value.