Doom Eternal is the sequel to 2016's Doom, itself a reboot of the landmark id Software series that got its start on PC in 1993. You play as the Doom Slayer, a preternaturally tough and athletic soldier whose strong distaste for demons drives him to kill scores of them in dozens of colorful ways. 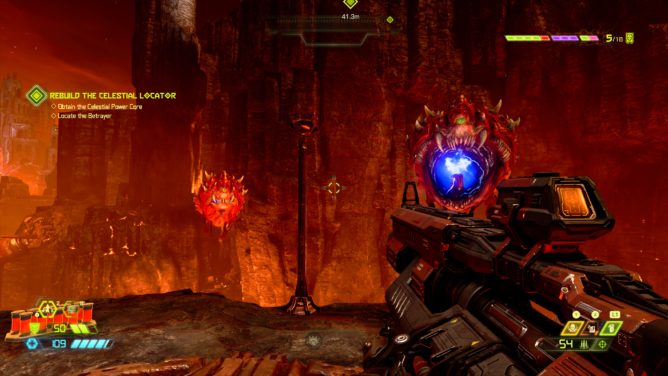 Eternal opens some time after the events of Doom 2016 to find that explicitly-evil megacorporation the UAC has, despite the Doom Slayer's efforts, ushered in a demonic invasion of future Earth, and the planet has been overrun. Working out of a previously-unseen base of operations in space called the Fortress of Doom (which also serves as an explorable hub), the Slayer has to find and eliminate three Hell Priests to stem the tide. This is ostensibly what you spend the majority of the game working toward, and the meat and potatoes of that effort plays out in wave after wave of firefights with various types of demons.

The heart of Eternal's combat is lifted straight out of Doom 2016. Most encounters take place in locked-down arenas that you can't leave until you've dispatched all the enemies — although battlefields are now frequently much larger, taking up entire city blocks in some instances.

Fights are wickedly fast. Your guns will fire without reloading until you're out of ammo. There aren't any waist-high walls to cover behind, and your health won't regenerate on its own. When you're hurt, you have to find color-coded armor and health pickups — or get even more aggressive.

Killing baddies in different ways rewards precious resources: when a demon takes enough damage, it'll flash, meaning it's ripe for a melee Glory Kill that'll shower you with health. Weaker enemies — "fodder demons," the game calls them — can be cut into pieces with a chainsaw to replenish your ammo.  You can set enemies on fire with the newly-added Flame Belch to make them spout armor pickups. Doom actively discourages passivity, resulting in thrilling fights that are sometimes dizzyingly quick-paced.

The Flame Belch isn't the Slayer's only new combat trick in Eternal. There are ice grenades, which briefly freeze enemies in place; the Blood Punch, a souped up melee attack that can damage multiple targets at once; a shotgun-mounted grappling hook that pulls you toward your target; and a dash move that can help you dodge incoming attacks or close the gap between yourself and a target quickly. Taken with an assortment of ranged weapons with different applications, all those moves mean there are a lot of balls in the air during any given dust-up.

In the thick of things, it can be overwhelming, but when you're dialed in, the crunchy combat is intensely satisfying. There's nothing better than properly leveraging all your weapons and abilities to erase a room full of enemies, culminating in a fantastically brutal Glory Kill. Keeping track of the frenetic action is all but impossible on a small screen, though; just because you can play it on your phone with Stadia doesn't mean you should. 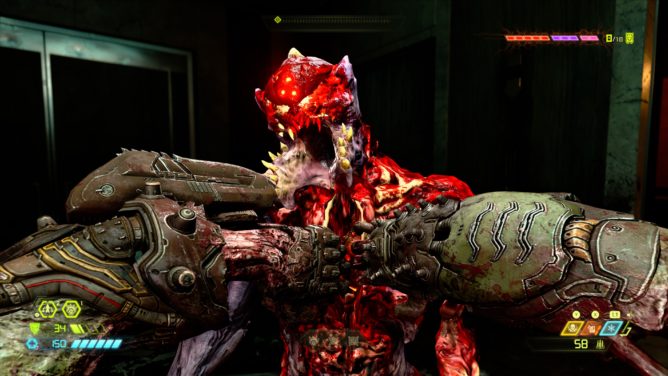 Your assorted guns all feel great to use, and each has different strengths and weaknesses. The plasma rifle makes quick work of blue energy shields. The heavy cannon's precision bolt mod lets you disable some stronger demons' offenses. Knowing which demons are most susceptible to which weapons is key. Enemies are a mix of ones found previous Doom titles and brand new ones, like the slithering, chain-slinging Whiplash. They all look wonderfully gruesome, and their unique shapes and movements help identify them at a glance.

Many baddies have explicit weaknesses (if you fire a grenade into a Cacodemon's open mouth, for example, it'll stagger and be open for a Glory Kill), but these are usually explained in pop-up text windows that pause gameplay. The information is helpful and often critical, but "show, don't tell" is a guiding principle of good game design, and it's something Eternal often struggles with. It's easy to tell which targets you've already damaged, at least, thanks to their destructible bodies: demons you've pumped rounds into will lose chunks of flesh. 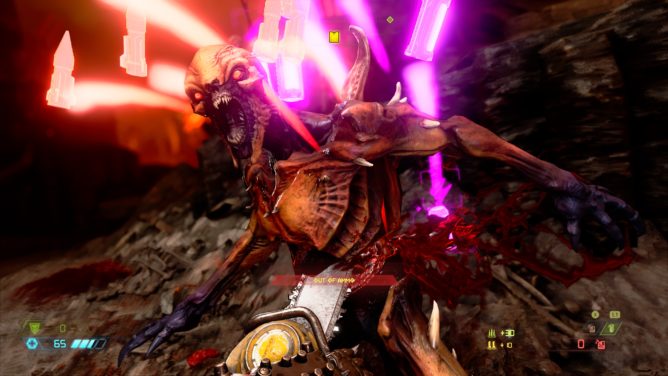 Boss fights are typically against one or two tougher-than-usual adversaries, plus regular enemies. These fights are often exhilarating, but creatures that were once bosses regularly turn up later, unceremoniously, as parts of normal fights. That helps to ratchet up the tension as the game goes on, but it also makes boss fights feel less special in retrospect. "Why was I so scared of this guy before?" I found myself thinking as I breezed through gunning down my nth Doom Hunter.

My first hours with the game felt like the toughest; with few weapons at my disposal, demons regularly made mincemeat of me on the medium difficulty setting. The unforgiving early game could very well turn off less experienced players. As I found my footing (and more guns and powerups), I settled into a rhythm and cruised through the middle missions — until later levels introduced another former boss into regular fights. I pushed through, but having to start longer fights over repeatedly often hampered my will to continue. Thankfully, you can adjust difficulty on the fly from the pause menu.

If there's a game where you'd notice input lag, it's Doom.

If the regular modes aren't brutal enough for you, you can try your hand at optional challenge levels — or Ultra-Nightmare mode, which is extra hard and permanently ends your playthrough if you die even once (the horror).

Lag never felt like it was a factor in any of my many deaths. With my fairly average internet connection (I get about 25 megabits down on a good day), I didn't notice any input delay — and if there's a game where you'd notice, it's Doom. Things did get a bit choppy on the end of my apartment farthest from the router, but my TV is only a few feet from it, so that was seldom a problem.

When you're not murdering (or being murdered by) hordes of hellspawn, you'll traverse sizeable levels through surprisingly robust platforming. The Doomguy can double-jump and clamor up ledges, and the new dash move is used to great effect.

You're able to dash twice before having to recharge, which you can only do while you're on the ground or by grabbing floating consumables (shades of Celeste). While airborne, you'll automatically reach out and grab any protruding bars, which give you a boost as you swing and refill your double jump. You can also cling to and climb certain vertical surfaces like an angry spider. Chaining all these locomotion mechanics together makes for some really fun sequences — except in a few cases where I was positive the Slayer should be grabbing a bar or a climbing wall, but he disagreed and repeatedly fell to his death instead.

The critical path is often hinted at with glowing green accents, but even so, I too often found myself running in circles, unsure of what I needed to jump on, shoot, or punch to reveal the way forward. Hitches like those are at odds with Doom's usual brisk and smooth pacing; things start to feel strange when you haven't ripped or torn anything for more than a few moments. 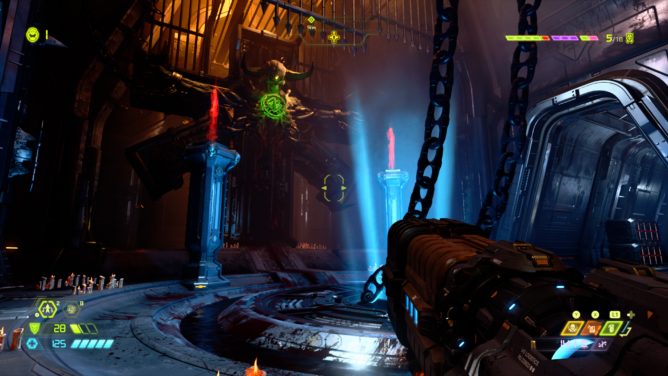 Exploration isn't solely to get from bloodbath to bloodbath, though. Levels are crammed with secrets: power-ups, extra lives, weapon and character upgrades, and just-for-fun collectibles. Sentinel Crystals upgrade your choice of health, armor, or ammo capacity, and are crucial to your survival. You can also upgrade aspects of your power suit — like resistance to toxic substances — with Praetor Suit points, and unlock combat mods for your guns (and even upgrade those mods!). If you're the type of player who likes to hunt for treasure, you'll have your hands full for days.

If the secrets aren't enough to encourage spending extra time in these levels, the atmosphere should be. Eternal's locales are more varied than those of its predecessor, and they're a joy to take in. There are reprieves from the blood, guts, and Satanic imagery, but even Hell itself is visually arresting thanks to the care with which it was designed and rendered. Mick Gordon reprises his role as composer, and the game's extremely metal soundtrack rarely disappoints. 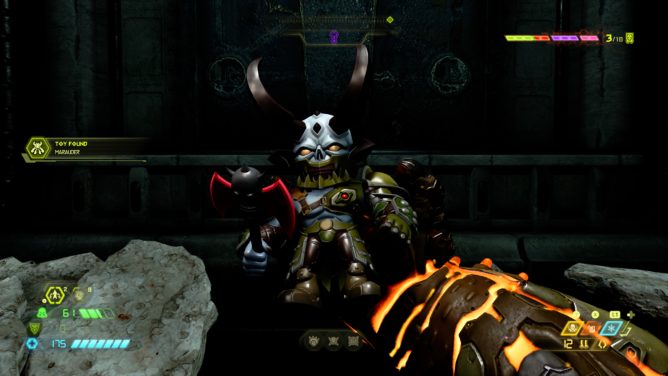 Collectible toys are a lot cuter than the real enemies they're modeled after.

Story has never been front and center with Doom; early in 2016's game, the Slayer smashes a computer terminal that talks for too long so he can get to killing demons, setting the tone for the whole campaign. Eternal starts out that way. It's not clear what exactly went down between the last game and this one, or what a Hell Priest is, or how the Slayer got a space castle. There are the bones of a story: the aforementioned priests talk at you as you murder them, and there are knights and a king and a race of creepy angelic aliens called the Makyrs. But you mostly just go about your business of slaying; if you want to know more about what's going on, you have to seek out hidden lore entries and audio logs. 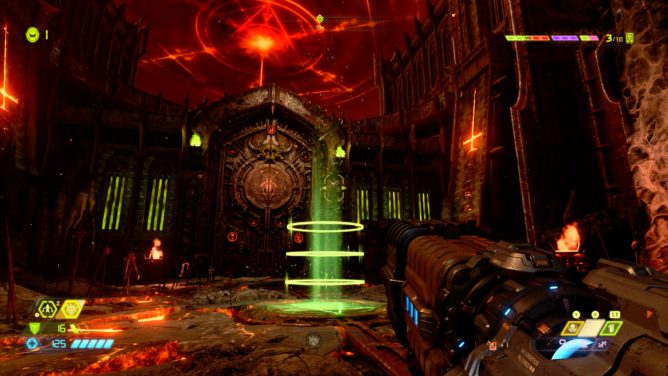 But later in the campaign, you reunite with a character from the previous game, and they talk your ear off, explaining what's going on and why at every turn, all the way up to the finale. The exposition dump feels clumsy and a little jarring; if Eternal was alright with us reading between the lines for the first 15 to 20 hours, why should the final five be any different?

That finale, by the way, is quite the spectacle, and it's sure to tickle longtime series fans. But it's not nearly dynamic enough to justify how protracted it is; I spent the better part of an hour hammering the boss. It's tough to stay engaged in one fight for that long — and the intensity gets exhausting. Still, a weak last hour couldn't spoil what was otherwise a powerhouse of a game.

If you like tough games with old-school sensibilities (and metal), hell yes. Doom Eternal is a ton of fun, and its wailing soundtrack and profane imagery are a real treat. You can make it as tough as you want it to be, but it remains approachable for most people who've played a shooter before on its lowest difficulty setting.

Like most games, it's more ideal to play it on a console or capable gaming rig if you've got one — but if you're a Stadia player, odds are you haven't. Streaming via Stadia on a capable network setup, Eternal's performance is indiscernible from what you'd get running it locally, and you have the flexibility to play with a gamepad on your TV, a controller or a mouse and keyboard on your computer, or even on your phone (though, again, I don't really recommend the latter) — and with Pro, you'll be playing in 1800p at 60 frames per second, same as you would on an Xbox One X. 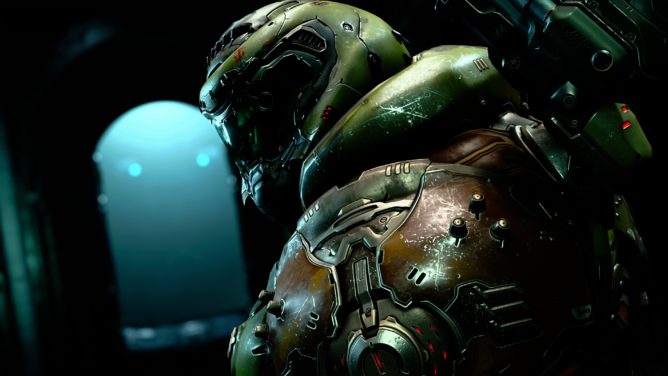