Google Podcasts may be well-integrated with Assistant and Home and Nest speakers, but compared to many other players out there, it has always been rather lackluster: Among other things, people have been complaining about missing features such as queues and auto-downloads. It looks like Google took this criticism to heart, as it's starting to roll out a redesigned version of Podcasts that adds these two along with bottom tabs and an improved home screen.

9to5Google shared some screenshots of the redesign. When you first open the app after receiving the server-side update, you'll be greeted by a banner that explains what's new: A renewed home screen, a new section for search and content discovery, and improved downloads and subscriptions management options, along with the addition of a queue.

Like before, the new home screen shows you thumbnails of podcasts you're subscribed to at the top, though they're now organized in the form of a carousel rather than a grid. Their blue "new" toasts indicating new content have been replaced by a red dot. Below that, you'll find a scrollable section of the latest episodes from your subscriptions.

Top and trending podcasts have been moved to the search bottom tab in the middle, along with other exploration opportunities. You also won't see your downloads and your history in the home tab anymore. These can now be found in the new activity bottom tab on the right, where you can also finally queue your episodes for consecutive playback. You also have access to your downloads, your history, and your subscriptions there.

Podcasts' settings, accessible via the Google account icon in the top right corner, has also seen the addition of new options, most notably auto downloading, which seems to be turned off by default. When you switch it on, Podcasts will automatically add new episodes to your phone. We must note that this has been available for some starting back in May 2019, but maybe it's rolling out wider as part of this redesign. You can also set up notifications for releases in settings on a per-podcast basis. 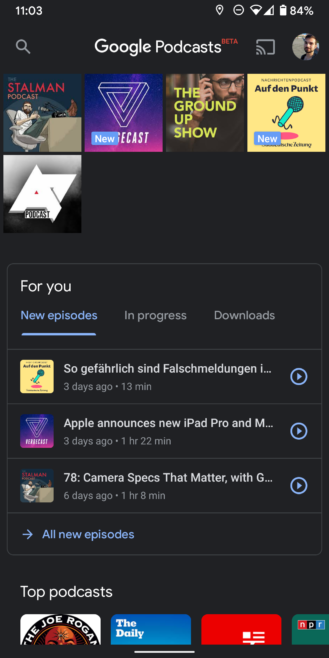 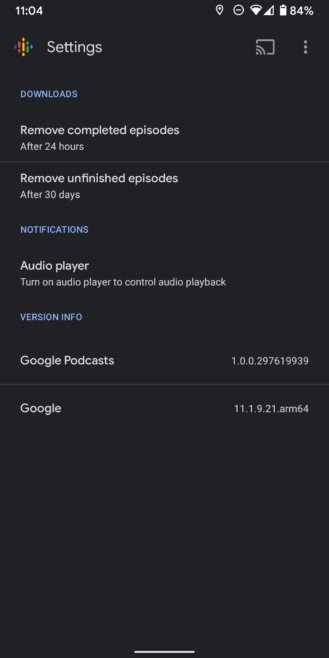 The previous design of Google's podcast app for comparison.

Right now, the redesign is only rolling out in a limited fashion — none of us here at Android Police have received it so far. Since the podcast player is part of the Google app, make sure you're using the latest version of it. You might also want to join the beta on the Play Store or download it from APK Mirror.

We knew this fresh look was on the way, and today Google has stepped up to formalize things. While the company's announcement focuses on the inaugural release of Podcasts for iOS, it also goes over the redesign we've been anticipating. Google confirms that distribution is underway, and should be hitting Android users sometime this week.

Explore topics in this episode carousel 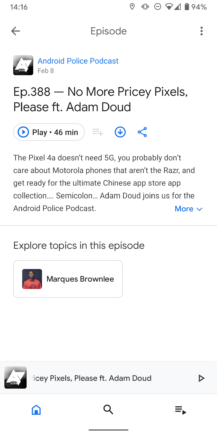 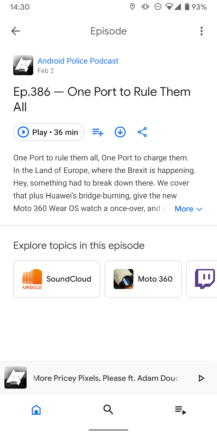 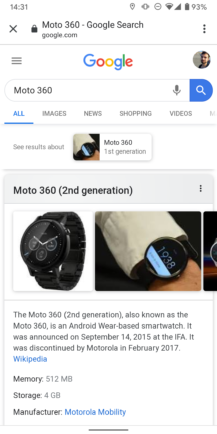 Now that the redesign is starting to roll out widely, a tipster has pointed out another neat addition: There's a new "Explore topics in this episode" section at the bottom of an episode's detailed overview. Tap one you're interested in, and you'll find a Google Search for the term in a custom Chrome tab. It's not entirely clear how Podcasts determines which topics are being talked about, but it might be made possible by the app's hidden transcription feature that's been in the works for about a year already.

Take a world tour from your couch with these apps