It appears Google continues to take action against the 1-star ratings being given to the Zoom app, as its rating continues to climb as the days go on.. It's now back up to a nearly-respectable 4.0, compared to a low of 2.0 when we originally reported on this story.

We've reached out to Google several times to try and obtain a statement about what's happening here, but it's clear some sort of safety mechanism (or active intervention) is saving Zoom's bacon, and continues to do so as this situation goes on. The number of reviews on the app's listing, curiously, is hanging right around 92,000 throughout this whole thing, suggesting Google may be doing some sort of flagging of new reviews.

The app at its lowest rating (March 17th)

Unfortunately, Google never replied to our requests for comment on this story, so we're left to continue speculating about what happened.

It's possible Google has gone in and manually deleted 1-star ratings it believed were frivolous or fraudulent, or the Play Store itself has tripwires designed to combat vote-brigading of this kind. Increasingly, it looks like Zoom suffered from some sort of targeted campaign, either by students or some automated bad actor looking to damage the company's reputation at a time when its popularity is going through the roof.

If we hear back from Google, we'll continue to update this story, but for now, it looks like things are headed back in the right direction for Zoom.

While the corporate workforce and student exodus into home offices and living rooms around the globe has undoubtedly been a boon for videoconferencing service Zoom's business, it's having a pretty nasty side effect: a lot of problems actually using said service (or in the case of students, it seems, a lot of problems with the idea of using it). And customers on the Play Store are particularly upset, as 1-star review after 1-star review comes in complaining about connectivity, the very concept of remote learning, and "Some ass app" (see below), wrecking Zoom's previously stellar reputation. 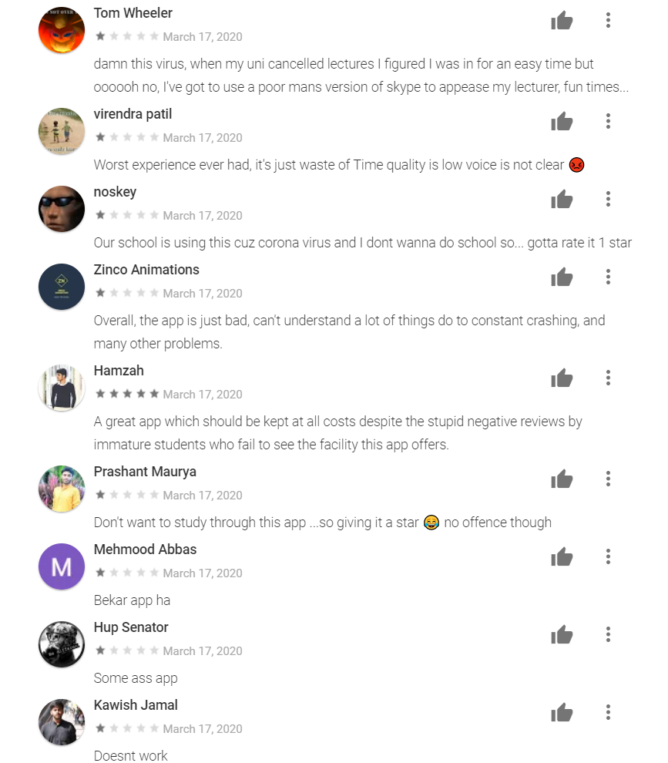 Given Zoom is facing absolutely unprecedented demand for its service, none of this is surprising. Scaling a platform like this so quickly isn't just a matter of optimizing software and network resources, it means adding actual, physical hardware capacity (whether for Zoom or through its web services provider) that can be difficult to do in a pinch. Zoom may have been better off rate-limiting new signups to the service during this time, but it was probably too afraid it would lose out to rival platforms like Microsoft Teams, Skype, Google Duo, Cisco Webex, and Hangouts Meet in doing so.

The question that arises from all this is whether Google will issue some kind of reprieve from what is essentially a non-organized vote brigade against Zoom during an understandably very trying time for the company. Rivals like Microsoft Teams (4.5 stars) and Cisco Webex (4.5 stars) aren't nearly as badly impacted, but I would argue that's because they just aren't marketed very much to consumers, educators, and small businesses, they're far more corporate apps.

This just serves to highlight how totally crazy the impact of COVID-19 is on our society, from physically staying indoors to breaking the tools people are now relying on to stay connected. So far, the internet seems to be holding together, but in the coming days and weeks, it's hard not to be a little anxious about what the added load could do to degrade other services, or the web at large. Let's hope Zoom is the exception rather than the rule going ahead.

Curiously, Zoom's iOS app remains at a strong 4.7 stars. That could mean the downvotes on Android are due to issues arising with the service that aren't affecting iOS, or that Apple could have frozen Zoom's rating after it saw a similar influx of negative reviews. Another possibility: this seemingly un-organized downvoting on Android actually is organized, and being done by students to attempt to get the app booted from the Play Store (as happened with an app in China).

Update, March 18, 2020: Google has begun deleting some of the 1-star reviews of Zoom's app, but it's unclear if this is an automated mechanism or active moderation by the Play Store team. We've reached out to Google twice now, but have yet to receive a response. The Zoom app's score has increased to a staggering, uh, 2.4 as a result of the deletions, but obviously still remains far lower than it was.