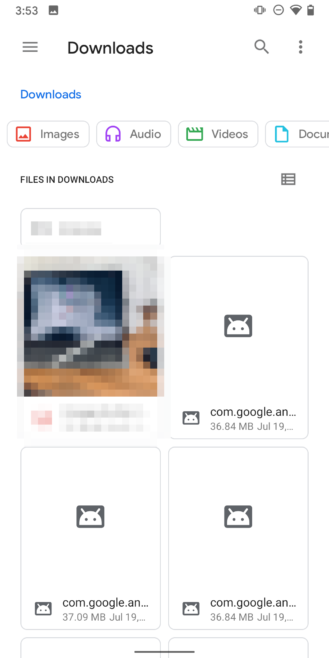 The built-in Files app, first introduced in Android Q, appears to have been deprecated as of Developer Preview 2. The user-facing application has now been replaced in the app drawer with Files by Google, or the app formerly known as "Files Go." However, the old AOSP files app is still around and handles some other functions, which brings us to...

The old "Files" app still sort of exists, though, through the file picker — you know, the screen that appears when trying to select a file to upload or interact with inside another app. 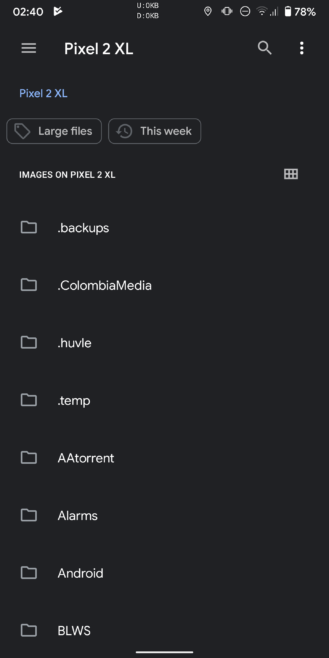 Note the two new sorting options at the top.

While the Files app and file picker have had sorting options for filetypes in categories like Images, Audio, and Videos for some time, two new options were spotted in Android 11: "Large files" and "this week." Also note, this change is present on Android 11 DP1, as well, we missed it before.

Wallpaper picker in the Styles menu 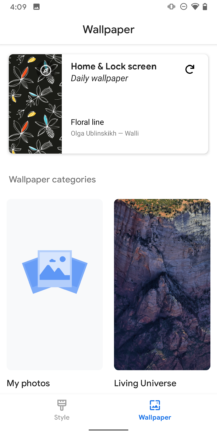 In addition to the new Clock picker we spotted, the wallpaper chooser in the "Styles" menu in Settings has picked up an improved layout, likely due to an update in the Google Wallpapers app delivered with DP2.

"Tap to restart this app and go full screen"

Prompt to restart an app and force full screen. Image via XDA Developers.

First spotted by the folks at XDA Developers, a new setting to restart apps in a forced full-screen mode appears on DP2 if the apps don't properly scale to/use taller aspect ratios. For older or unmaintained apps, it might come in handy (though it may also misbehave).

The new "Conversation" notification grouping added in Android 11 DP1 got a small visual overhaul in DP2: 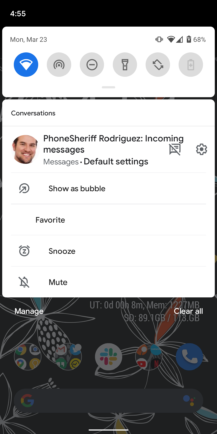 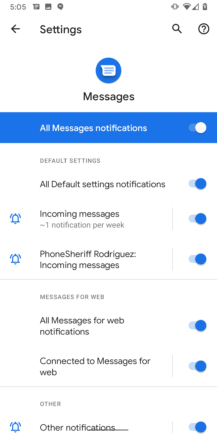 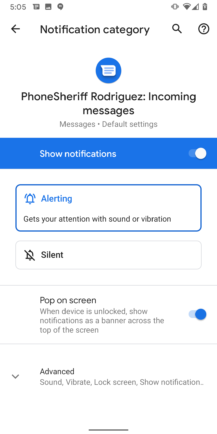 Conversation long-press options and settings in DP1 (above) and DP2 (below).

Furthermore, if you mark a given conversation/contact as "Important" (via the sideways arrow/chevron long-pressing a notification or in Settings), their avatar will replace the notification icon.

We don't know how many apps this contact avatar support might ultimately work with, but we know it plays nice with Google's first-party Messenger app.

A software teardown of Android 11 DP2 reveals that we may someday be able to resize the picture-in-picture overlay used by some apps, like YouTube. No one has been able to get the feature to work just yet, so it's likely a work in progress, but it may yet manifest in a future version.

A new "Manage conversations" settings group has appeared in Settings -> Apps & Notifications -> Notifications on Android 11 DP2. So far as we can tell, it shows when you've set a specific contact/conversation to be 'important" (as mentioned above), with a few more controls related to those and other conversations. The list will probably change with time and as you use it.

Spotted in an XDA teardown of the latest Developer Preview, Android 11 DP2 has some tweaks deep inside that might eventually allow you to simultaneously play audio back from multiple connected output devices — potentially even including wired outputs. However, the features are unfinished, and they may never manifest in a consumer-facing way.

Silent notifications can be hidden

Android 11 DP2 steps up the war against necessary-but-detested notifications, giving you the option to hide silent notifications from appearing in the horizontal list of icons in the unexpanded status bar. So not only will you not be bothered as they come in, their app icons won't be annoying you up there until they're dismissed, either. Expand the notification bar, and they're still there in the "Silent notifications" group, though.

We've known that native call recording has been planned in the Google Phone app, but a teardown of Android 11 DP2 reveals that system-level support for call recording in third-party dialer apps is being worked on — though who knows if or when it will actually manifest.

Two new display cutout types have been added to the developer options menu hidden in Settings, allowing them to experiment with so-called "Punch Hole" and "Waterfall" cutouts. (Not visible in the screenshot above is a black circle to the left of the time in the "Punch Hole" setting.)

The snazzy new Android Flash Tool is compatible with Android 11 Developer Preview 2. That means you can install DP2 from just inside a browser, no mucking about with ADB or USB drivers. Just keep in mind that this requires an unlocked bootloader and makes a complete wipe, vs. sideloading the OTA manually, which does neither.

Android 11 DP2 adds "Additional support for auth-per-use keys," which I think is a technical way of saying that developers, if they choose to, can heighten security for user data in more ways, which we might see manifest as additional biometric or two-factor authentication prompts when using apps in the future.

We may yet have a couple more things to add to this list as we dig further in, but barring anything really well hidden, Android 11 DP2 has told us most of what it knows.