Apparently, I've been living under a rock these last few years. There's a service out there called Pluto TV that offers streaming video with plenty of big-name shows, live news, content from folks like Comedy Central, MTV, VH1, and some sports. Beyond cable-style TV channels (of which it has ~200), it also offers some live TV and even on-demand streaming with a surprisingly decent selection of movies. Best of all, it's entirely free, and you don't even need to make an account to use it.

Honestly, I'm kind of stunned that something like Pluto TV can even exist. It's not just the fact that it's free (though it has ads), it's also the variety. While you don't get the usual cable TV channels with a complete, curated daytime schedule, it is a surprisingly wide selection. If you are actively following big network shows, it probably won't be enough, but if you just want something to toss on in the background, Pluto TV will more than suffice.

If you're considering cutting the cord as a way to save a bit of dough during the current coronavirus crisis, Pluto TV is a great alternative.

How to use Pluto TV

Pluto TV is available on a wide variety of platforms, from Android and iOS devices, to a desktop browser, and even your Roku.

Setting it up is frankly trivial: Just fire it up from your preferred device and, well, watch. 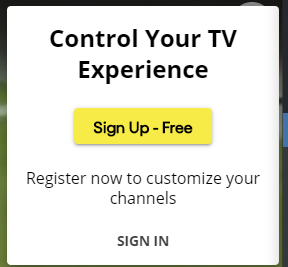 You don't need an account or anything, though you can make one if you want to. Ostensibly, the only reason to register for an account is to customize your channel selection with a group of favorites, saving you a bit of time as you navigate the enormous lists. However, most platforms don't support that functionality right now, and Pluto TV says it's disabled the feature on most devices. Although it works for me in the Android app, you can't access your list of favorites from the desktop site.

The interface varies a bit based on your platform, but the mobile app is easy enough to understand. Its design is a little dated, but a bottom navigation bar lets you switch between live TV and streaming shows/movies. When it comes to live TV, you can only see around two hours into a given channel's future at a time.

Live channels cover a wide range from multiple news sources, to single-show subjects like the Cops, Hell's Kitchen, Doctor Who Classic, and Baywatch channels. Networks like Comedy Central, MTV, and Nickelodeon also have content spread across different channels — though you should note you don't get the usual cable channels you're used to. 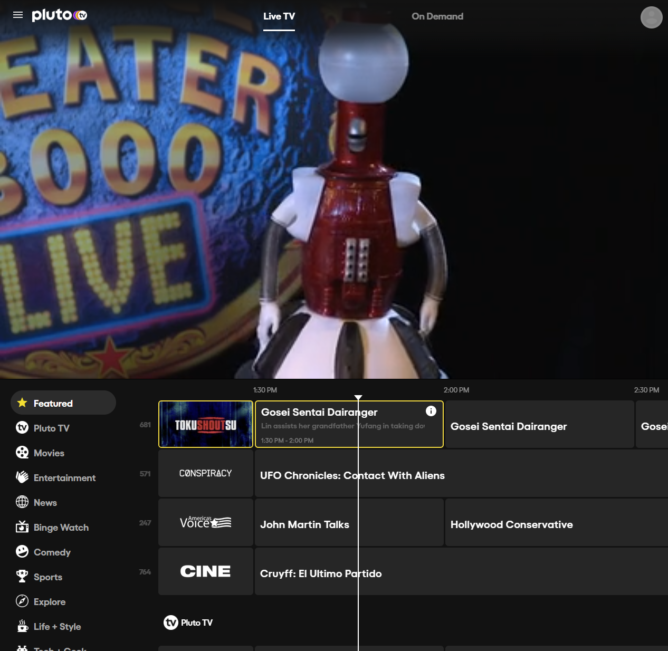 Desktop interface for Live TV (above) and on-demand content (below). 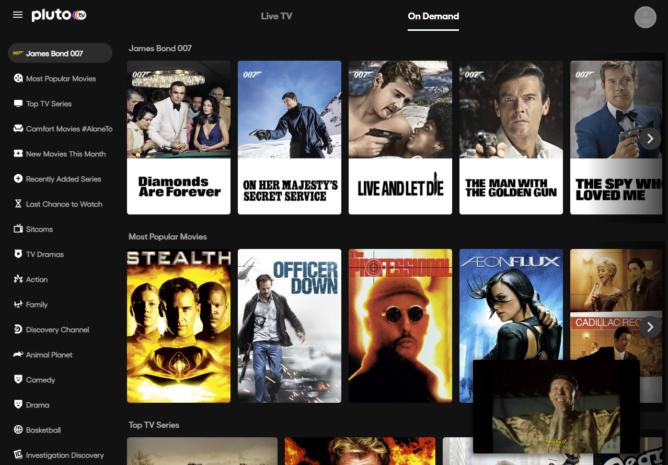 As a free service, it's ad-supported, and that part of the experience varies. When it comes to live channels, you'll see advertisements at the frequent intervals you're used to from broadcast TV. The ads themselves seem to vary by channel, and some of the more niche ones have quite repetitive ads. On-demand streaming movies also had advertisements, but they seemed to be less frequent.

The selection of on-demand titles is also surprisingly good. I don't know if it's typical of Pluto TV or if it's received new additions as a result of the coronavirus, but there are some surprisingly good titles available to watch. It's a matter of taste, but I consider (Leon) The Professional, Clue, and Legally Blonde modern classics — though actual classics like In Harm's Way and Funny Face are also available. And if you want to binge-watch some James Bond flicks ahead of No Time To Die's (now delayed) release, there are plenty available.

The Android app supports streaming content to your Chromecast, so you can watch on the big screen. I did notice that the streaming quality for titles varied, though. In some cases, the advertisements were of higher quality than the actual content being watched, and some of the streams were highly compressed. Still, the streaming quality was generally good-to-acceptable, and it's tough to complain too much when it's free. You can also configure additional settings to limit video quality if you're worried about consuming too much data.

If Pluto TV has one glaring omission, it's a lack of a search function. If you can't find a given channel or show based on its category or an on-demand title through its genre, you're pretty much out of luck. There's a lot of good stuff to be found, but much of it is hidden. JustWatch claims to have the platform's full list of titles, but I noticed some omissions. The on-demand selection at Pluto TV also changes with time, with an even 100 new flicks landing this month.

If you don't have Kanopy or Hoopla available through your local library (or if you run out of things to watch there), Pluto TV can keep you from spending too much money on streaming services as we're all trapped inside for the foreseeable future.