While many people seem to have developed an aversion to Stadia, I personally still absolutely love Google's vision for cloud gaming. Sure, a lot of promised features haven't made it into the product yet, but it's slowly coming together. I'm surprised again and again how well it performs, just like others on the Android Police team. If you're not already heavily invested in Xbox, PlayStation, or PC and/or are willing to give a new cloud gaming platform a go, Stadia could be interesting for you. Today only, you can also save $30 on the Premiere Edition of the service, costing you just $99 instead of the usual $129.

The Premiere Edition gives you three months of Stadia Pro (normally $10 a month) and a buddy pass that allows a friend of yours to enjoy the service free of charge for the same amount of time. In the box, you also get a white Stadia controller and a Chromecast Ultra dedicated to gaming (though it's possible to play Stadia on any Chromecast Ultra following a firmware update last year). If you decide to buy any game, you'll have access to it indefinitely, even when you cancel your Pro subscription. 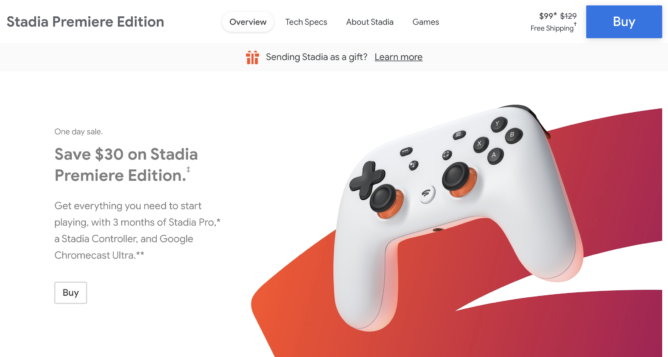 To take advantage of the deal, head to the Google Store. It looks like it's only active in the US, though. Keep in mind that if you want to play the brand-new Doom Eternal on the platform, you'll have to shell out at least $60 more to get it.

Coronavirus pushes YouTube to lower its default streaming quality too The best grocery (and alcohol) delivery services, plus discount codes