Specs will not impress. Sooner is powered by a TI OMAP 850 SoC, paired with a paltry 64MB of RAM, a 320x240 resolution display, a 1.3MP camera, 960mAh battery, and 2G connectivity. Sooner has no touchscreen and doesn't even support Wi-Fi, if you can believe it. It's closer to being a mid 00's Blackberry than a modern smartphone, with one exception: It's probably running a very early (read: pre-1.0) version of Android. 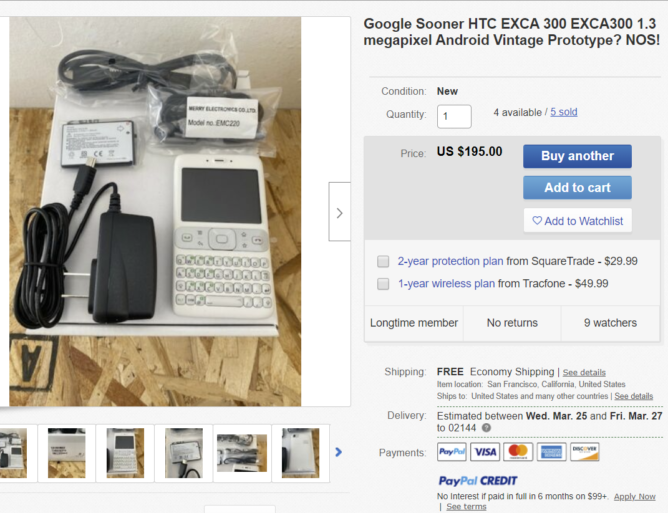 The listing claims these models are new old stock that have been sitting around for over 10 years. The batteries might no longer work, and carrier support is likely to be a crapshoot. They come with the phone itself, a battery, AC adapter, and an earpiece. Other documentation is missing, which is to be expected — these are unreleased prototypes. For all we know, they may not even work anymore.

The seller, who appears to specialize in drums and music accessories, has a decent rating with plenty of feedback, and the phones ship from San Francisco, California. In short, it looks legit, and there isn't much of a risk of it not showing up, though whether it will work when it gets there is a valid question.

Looks like all available units are gone. We managed to snag one, though, so look forward to some future fun.