Screen recording finally showed up as a native feature in Android Q/10 last year. Unfortunately, it was pretty broken, and Google eventually disabled it (though you could still turn it back on). Now it's back in the new Android 11 developer preview, with its own tile in quick settings, though it's still a bit buggy.

Right now, it can't record internal audio, and there's a bit of a delay between triggering the recorder from the Quick Settings toggle and it actually starting. There is a potential explanation for it, though. When manually enabled on Android 10, the built-in screen recorder is supposed to show a prompt when started that asks if you'd like to record audio and show taps on the screen during recording. This isn't happening on Android 11 for us, and it could be that missing dialog is to blame for both the lack of audio and the delay — perhaps it will show up in a future release.

The Screen Record tile may not appear for everyone by default in Quick Settings, but it should be available in the Quick Settings editor if you don't see it.

If you tap that new Screen Record tile, the prompt you see above appears. Tap "Start now," and after a delay of around three seconds, your recording starts, a persistent notification appears, and a red-filled Chromecast notification icon appears on the status bar. The ongoing notification offers a few controls: "Stop," "Pause," and "Cancel," all pretty self-explanatory. I have noticed if you take a screenshot while the recording is in progress, it can bug out, though, removing the notification and making the screenshot notification undismissable, so be careful. Recording can also be terminated via the quick settings toggle.

The refresh rate indicator added in Android 11 also seems like it might be bugging out just a bit while recording.

Based on this tweak, it looks like Android 11 will finally enable the built-in screen recorder Google's been teasing us with since last year, and presumably its remaining issues will be fixed in later preview releases. Unless they disable it again, Android bloggers like us that frequently need to record on-screen content will be happy campers come this fall.

With the release of Android 11 Developer Preview 2, things have changed a bit for the recently added built-in screen recorder. The floating dialog has been updated with a new look and a couple options. Users can now choose to enable audio recording through the microphone and to show screen touches, which saves you from having to open developer settings to enable them manually. 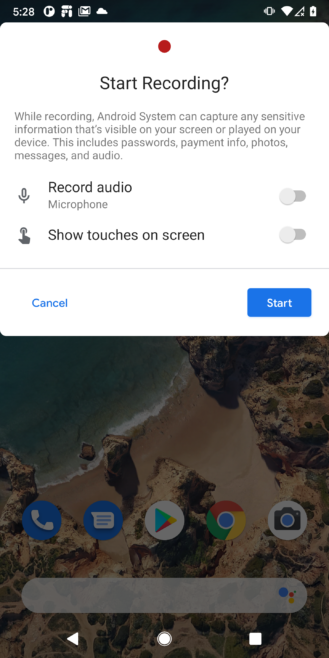 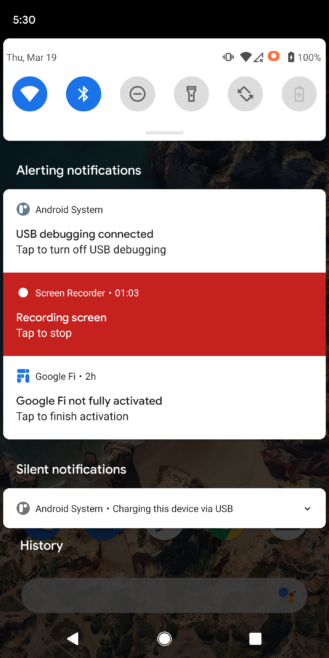 There is also a change to the persistent notification. In the old version, it was shown with a background matched to the system theme and provided buttons to stop, pause, or cancel the recording. The new version is now shown in a highly visible bright red background. But three buttons have also been removed, and now the recording is stopped by simply tapping on the notification.

Finally, some new text strings point to pending support for internal audio recording. While references to recording "sound from your device" are present, there's still currently no way to activate this functionality — perhaps waiting for a future preview release.

How to transfer your phone's apps, messages, and photos to your new Galaxy S20