Starting last evening, Google's Nest cameras started suffering widespread issues with both live feeds and recorded video history. Although the issue resolved for many overnight, some are experiencing problems accessing video recordings and, in some cases, live feeds as well. Google currently claims a "small portion of cameras" are still having trouble, and it's working on a fix. 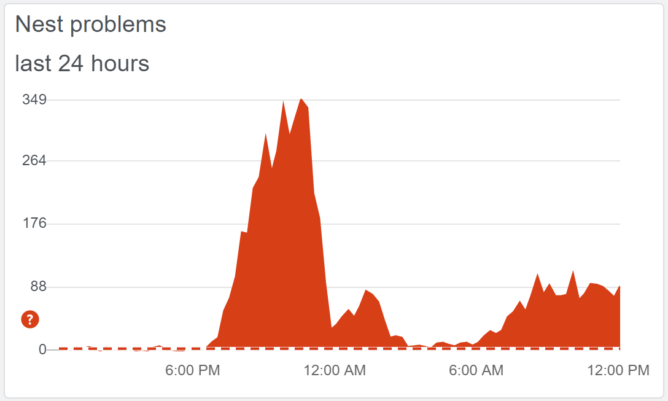 According to crowdsourced issue reporter Downdetector, reports of problem spiked yesterday starting around 8-9PM ET, falling off just before midnight. But a steady, smaller stream of reports have trickled in since this morning.

Based on the most recent update to the Nest status dashboard, Google is currently reporting a "partial camera connectivity issue," and the company is continuing to work on a fix. Although it only mentions video history being affected, a handful of reports on Twitter indicate that live feeds may also be affected. The @googlenesthelp support line on Twitter is telling those who report problems that the company is aware of the issues and working on a fix.

Hi there, thanks for reaching out. We're sorry for the trouble. We're aware of this and is working on a fix. We'll let you know once we have more details. Thanks for your patience.

Not everyone appears to be affected, and for some, only certain models of cameras are having problems. Whatever the cause, it sounds as if Google will have the remaining issues under control soon.

GitHub app for Android and iOS leaves beta, now available for all