Friday afternoon is all about Pixel leaks, it seems like. The folks at XDA Developers just dug up some evidence from that Pixel 4a that previously showed up on video, which indicates Google's next mid-ranger will pack faster UFS 2.1 storage. That will almost certainly be a significant bump in storage speed over the comparatively "slow" eMMC in last year's Pixel 3a. Not all of our readers will be familiar with the differences between these standards, but the short version is: The Pixel 4a could anecdotally feel a lot faster.

The news comes courtesy of a screenshot of the bootloader that describes the type of storage on the phone as being UFS-based, and the output of a command issued via Fastboot further confirms the individual specification as being UFS 2.1. 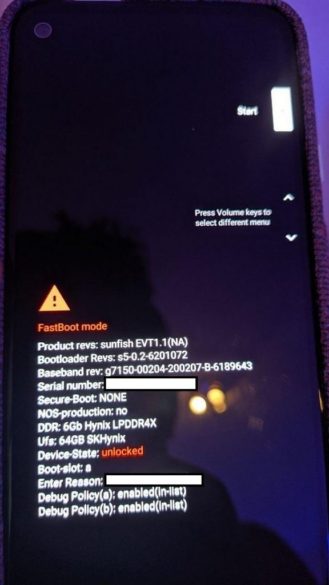 Photo of the bootloader on the Pixel 4a from TecnoLike Plus. Image via XDA Developers.

Sadly, you can't really trust storage benchmarks performed in userspace on Android these days, so it's hard to get an objective metric to base comparisons on, but eMMC-based storage is almost always slower than UFS-based solutions. Admittedly, Google did a very good job with the Pixel 3a, and its storage wasn't terribly slow, but it certainly wasn't as fast as other Pixels, and storage speed is a very important metric for day to day use, and you see the impact it has immediately when it comes to things like starting apps.

Anecdotally, one of the things that makes a phone age most poorly is storage speed. Fast storage loads apps quickly, which makes it feel snappy, and it allows background operations that rely on read or write speeds like refreshing recommendations, intelligently opening/loading content before you get to it, and app updates not to bog your phone down while you're doing something in the foreground. OnePlus, for example, wisely included quite fast storage in all its phones going back to the original OnePlus One, and the company's devices have aged quite well.

Choosing and optimizing the filesystem for the type of storage being used can compensate somewhat for using slower eMMC memory, but the best way to improve things is simply to use faster storage to begin with, so it's excellent news that the Pixel 4a, by all appearances, will be upgraded to UFS 2.1.

I was worried that Google might not find enough important things to improve on the Pixel 4a without bumping the price, but if the company can toss in UFS 2.1 storage while keeping the price the same — which leaks indicate will happen — then I'm very happy to be wrong.

Anki, maker of Vector, Cozmo and other toy robots, is shutting down (Update: Revival project)