Well, well, well, look what we have here — another exercise in cramming and jamming parts into a glass-and-metal box that is a Samsung phone. Specifically, iFixit has taken a look into the biggest and baddest one yet, the Galaxy S20 Ultra, and has found it to be not too easily repairable, rating it a 3 out of 10.

Ever since moving to a glass-and-metal construction for its flagship devices from the Galaxy S6 onwards, any teardown (for repair purposes or what have you) has to begin with a heat gun pointed to its back to loosen the adhesive holding the back pane in place. In fact, adhesive use across multiple portions of the stack, battery included, is a familiar hurdle these days. The glue poses a substantial failure or breakage risk to components, especially if they're attached to the glass — fortunately, that doesn't seem to be the case here. 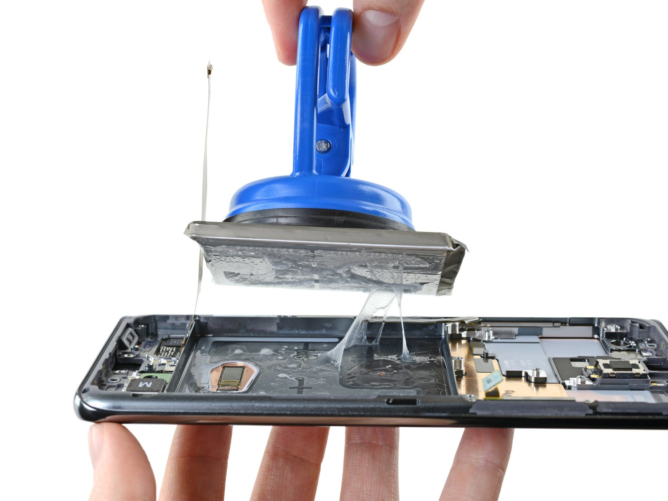 The display cabling has been streamlined somewhat and only one type of Phillips screws are used in the build, but those two points don't redeem much for the Ultra, which sports that ultra-big 108MP camera sensor — light needs to bounce onto a mechanically-stabilized prism before hitting the pad!

For reference, last year's Galaxy Note10+ and Galaxy S10 also got 3s. And, of course, you can get more details on the breakdown at iFixit.

Zack Nelson, the man behind JerryRigEverything on YouTube, took apart the S20 Ultra in a video.

You'll see a bit of copper-based cooling — oddly no thermal paste here — and a bunch of other little tidbits if you have time to watch during your lunch break. Plus, rants on how pricey phones have gotten for not much better performance and how 5G still isn't really "here" in the world (and it really isn't). It's a fun watch.

Samsung publishes photos and specs of the upcoming Galaxy A11