It seems like barely anyone still talks about Google Groups, but with the company's social network shuttered, it's the only way developers can privately test new Android apps. The service is generally often utilized by coders as an alternative to Slack. However, Groups' design can't compare to its competitors or even Google's other web services anymore, which is probably why the company has decided to start testing an interface revamp as part of a limited beta, slated to be fully deployed later this year.

The update brings Groups on-par with Google's other web services. The gray bar and orange-red accent colors are gone, making way for Google's all-white, more spacious iteration of its Material Design Theme. Like Gmail, Calendar, Keep, and Co., a hamburger menu now sits in the top left corner, followed by Group's icon and name and a search bar with slightly rounded corners. In the sidebar, a plus pill lets you create new groups, and in the area below it, you can navigate between existing communities, recent activity, starred content, and more. Visually, it's a drastic change, but in the end, the layout remains familiar.

There are also some improvements under the hood. Search has become more powerful thanks to new filtering options, group creation has been rethought as a quick three-step wizard, and Topics have been renamed to Conversations to match Gmail's naming conventions. Additionally, Group settings can now be found in one single section for easier access, and managing members should be simpler thanks to a reshuffling of the respective section. 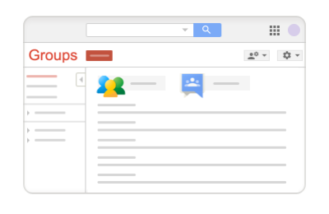 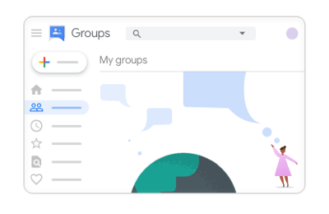 Since this is a beta release, there are also some missing features, like collaborative inboxes, tags and categories, welcome messages above group conversations, and access to moderated messages. That's why Google has included a toggle that lets you switch back and forth between the new and the old design, so you can still access these features.

There is no word on a new mobile site just yet, which is in an even more dire need of a redesign since it looks like it's straight from 2005. It also doesn't have feature parity with the older desktop equivalent — for example, welcome messages aren't displayed on mobile when you join a new group, which could potentially lead to problems.

Right now, you can only take part in the beta if you're the super admin of an organization that uses G Suite. Us regular Joes will have to wait for the beta to open up to more people or for the update to roll out in stable. Google wants to publish the redesign to everyone "later this year," so let's hope it does so sooner rather than later.