Google has posted images for the March Pixel update to the usual spots for manual installation, if you're too impatient to see it roll out via the traditional means. However, although this month's update is supposed to correspond to the latest Pixel Feature Drop, some of the new features don't seem to be live in the March update just yet. As we noted in our prior coverage, some things may require app updates or server-side changes before they work. (Update: Though they're almost all live for me as of around two hours later.)

Non-security Pixel changes in this update are substantial, with tons of fixes and improvements for individual features: 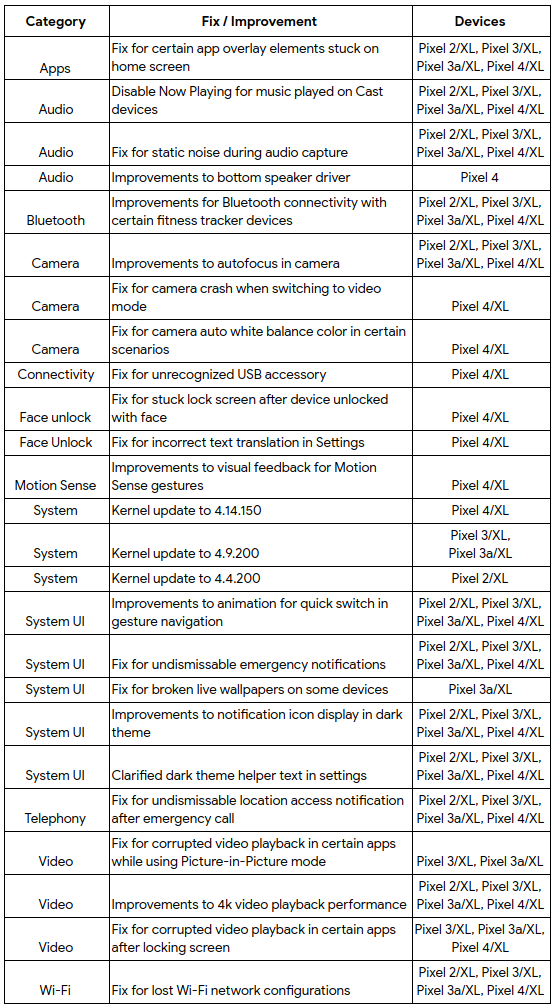 I don't think I've ever seen this before, but all the currently supported Pixels have gotten kernel version updates. While they almost always get backported fixes, especially for security updates, usually phones live and die on a single numbered kernel version, so this is a little unusual. Piles of other fixes and improvements are also included, plus "Now Playing" won't respond to music coming from a Casted device, and the bottom Pixel 4 speaker should sound a bit better.

Although we assumed most of the features in Google's latest Feature Drop would be delivered directly as part of this update, that doesn't seem to be the case. Sideloading the OTA onto our Pixel 4 shows a mix of new features. We've got the new emoji and the new power menu wallet, for example, . Individual features may also have other prerequisites for functionality, like a server-side change or app update.

Either way, you can download both the OTA images and full factory images for manual flashing, if you're already tired of tapping the "check for update" button. We should note, images for the Pixel 3 and 3a are currently missing builds for some carriers: the 3a is missing Sprint/Fi, and the Pixel 3 is missing T-Mobile and Fi.

General Android and Pixel-specific security bulletins are also posted, each featuring the usual pile of security enhancements and fixes (including a pretty major one for MediaTek devices). As per yooj, it's in your best interests to update sooner rather than later.

March update for Pixel 3/3 XL on T-Mobile and Fi, Pixel 3a/3a XL on Sprint and Fi

Images for the Pixel 3 and 3 XL on T-Mobile and Google Fi have been missing when Google initially started the rollout, but over the weekend, that has changed: The downloads are now available on both the factory image and the OTA website. The same is true for Sprint and Google Fi users that have a Pixel 3a or 3a XL: They can now also get the March update. In contrast to the AT&T update that got an extra release, the Pixel 3 and 3a can be flashed with the same software across all carriers.

If you're a Pixel 3a owner on French carrier Bouygues Telecom, you're in for a longer wait, though. Google still doesn't provide updates for phones on it.