DJI can be considered as a pioneer in video tech miniaturization — just look at its recently announced Mavic Mini pocket drone. But the company already proved its expertise two years ago when it unveiled the Osmo Pocket, its tiny gimbal camera. This piece of equipment is currently heavily discounted on Amazon, going for only $279, which is about $70 off the regular price. The retailer also throws in a free 32GB SanDisk microSD card that you can use in the camera.

The Osmo Pocket is stabilized on three axis and super lightweight at 116g, making it great for filming action scenes without the bulk of a professional setup. A small built-in display even lets you use it independently from a smartphone, but it's also possible to attach your phone to it. The camera records in 4K 60fps at 100Mbits using its 1/2.3-inch sensor with an 80° field-of-view and an f/2.0 aperture. Keep in mind that you have to register with DJI before you can fully unleash the device's potential, though. 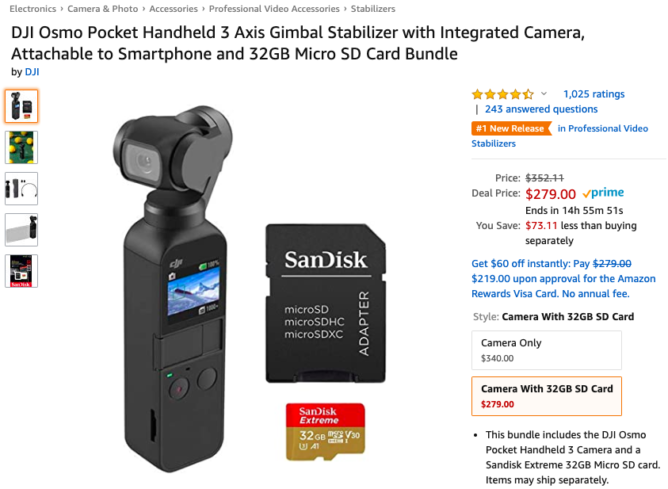 The camera alone is already a great deal at $279, but the added free SanDisk 32GB microSD card certainly is the icing on the cake. Once you've made up your mind, you should head to Amazon rather sooner than later, as the deal could sell out quickly.