Despite some flaws we like to nitpick about here at Android Police, the Google Pixel 4 XL is currently still among the best phones out there. In contrast to the competition from Samsung and Co., it's guaranteed to receive three years of software updates, and it just got a plethora of new capabilities thanks to the latest Pixel feature drop. If you want to get in on that experience, you can buy the unlocked version of the maxed-out Pixel 4 XL with 128GB of storage for just $750 on Amazon right now — that's $250 off the MSRP and a lot cheaper than any brand-new Galaxy S20 phone.

Let me preface this with the caveat: Only the black version of the model is available at that price while the white one is going for $975. But even if you don't like this color, you can always just slap a skin on it or use it in a case. We've also previously seen the 64GB versions of both the regular and the XL variant drop to even lower prices at $600 and $700, respectively. However, I wouldn't recommend getting the regular Pixel due to battery life concerns, and even if the 64GB XL drops to $700 in the near future again, the $750 128GB model is still an insane deal. 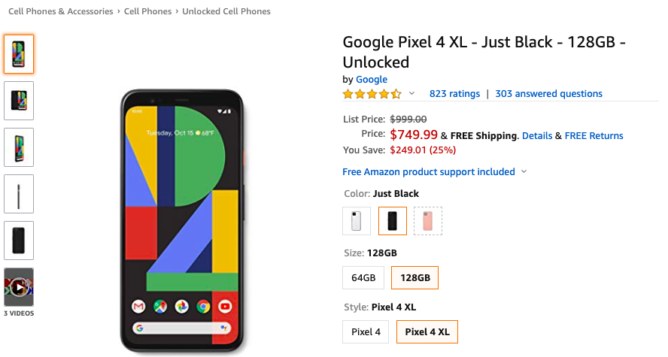 Since this is the lowest price we've seen, you should make up your mind quickly and act fast — the inventory could run out rapidly.

It looks like a similar sale was inbound for the standard Pixel 4 as well. You can pick up the 64GB model from Amazon, Best Buy, or B&H Photo for an all-time low of $550. The 128GB version is on sale as low as $650, too, but pricing appears to be inconsistent. The Fossil Sport smartwatch is just $90 right now at Amazon