Samsung put out its phones. We've put out our review. You've yet to make a purchase decision. It's okay. If you didn't pre-order a Galaxy S20, S20+, or S20 Ultra, don't worry: depending on which retailer your prefer, you may have greater incentive to buy a shiny new 5G phone today. We've got the details on all the sweeteners these brands are offering to get a shiny new slab in your hands.

If you need to get your bearings straight in terms of what models are offered at which MSRPs, we've got that taken care of — including how that price breaks down into 24 monthly payments.

Plenty of places offer two-year financing at zero down and zero interest, but there are always exceptions. We'll confront them when we get there. 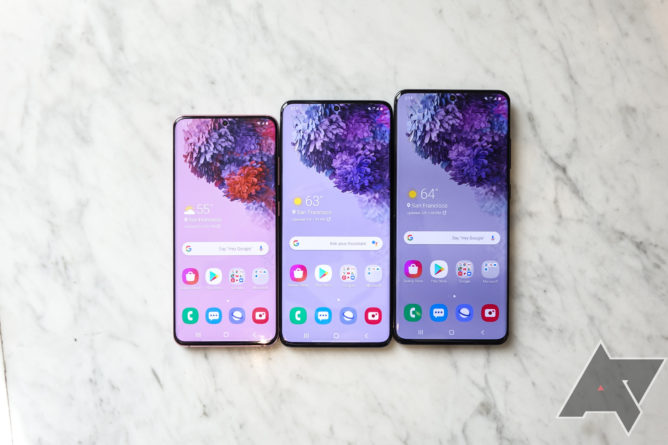 For the sake of not wasting your time, we're covering the five major postpaid carriers in the United States (or four plus one, if you make that distinction). We'll point out the promos and list what you'll need to do to be eligible for them. You should presume any discounts you see to be doled in monthly credits throughout the term of a device installment plan or lease.

It'll take a little bit of time before the prepaid ones come into play — AT&T's Cricket Wireless is due to get an S20 model or two, for example. Plus, a lot of the postpaid MVNOs that are offering the devices like Xfinity Mobile aren't really stacking up their bennies.

As we're talking about Sprint structures, remember that this company uses 18-month leases for its phones (not for other connected devices, though, hence the 24-month plan on the Galaxy Watch). You'll pay the same amount per month as you would for a 24-month term, but come the end of the lease, you have the choice of either returning the phone for the ability to upgrade or pay off the device with 6 extra monthly payments or a single lump sum equivalent and own it.

The super-regional carrier plans to launch 5G in 10 cities across Iowa and Wisconsin sometime this year.

If you'd rather get your phone away from the networks, the big box stores and Samsung itself have some value for you, too.

The site is still running its pre-order era promo, offering no discount, but free Galaxy Buds (not the newer + version, the older, but still alright ones) and a Duo wireless charging pad. Unfortunately, the bundle isn't available for the S20 Ultra as of writing and, if things continue to sell, it won't be available for the other phones, too.

No discounts here and, even as sales are supposed to begin today, its S20 product pages are still in pre-order mode as of writing.

The tech-focused big box chain is offering unlocked, AT&T, Sprint, and Verizon units with up to $700 in credits fora trade-in device (most phone that are a year or two old will cost out around $400 or $500) and an extra $150 off upon activation. Every model is also getting a $150 instant discount on top of that minus the unlocked S20 Ultra which only gets $50 off. Best Buy is also mirroring deals from AT&T and Verizon.

The company itself is also selling phones compatible with AT&T, Sprint, T-Mobile, U.S. Cellular, and Verizon as well as U.S. unlocked units. It, too, is offering up to $700 on trade-ins and is now bundling 4 months of YouTube Premium for free with an S20 purchase. You can finance your device over 36 months at zero interest.

Google has pulled the March update for the Pixel 4 on AT&T (Update: Available)