Stadia's launch was rough, to say the least — it felt like a beta release. Google promised a ton of features that ended up not being available back in November 2019, and they're only now trickling down into the service one by one. The company is picking up steam, though. After just making screenshots and captures downloadable this week, Stadia has now also added 4K support to its Chrome version for some users.

The feature comes four months after the service's launch in November, so someone who was lured into Stadia by the promise of 4K gaming on their computer might be annoyed that it took this long, especially since it's a paid Pro feature (the free version caps at 1080p). Nevertheless, first people on Reddit report that they finally see a 4K badge in their connection monitor in the Stadia sidebar, accessible in-game via shift+tab. While you usually need an "excellent" connection to get 4K, 9to5Google reports that it has also managed to get the highest resolution working on an "OK" connection.

To check if Stadia already supports 4K on your browser, make sure you've activated "best visual quality" in your account's Data usage & performance settings, accessible via your avatar in the top right corner of the streaming service's app. Then, start a game and see if you have a green 4K badge in your connection stats, as depicted below. 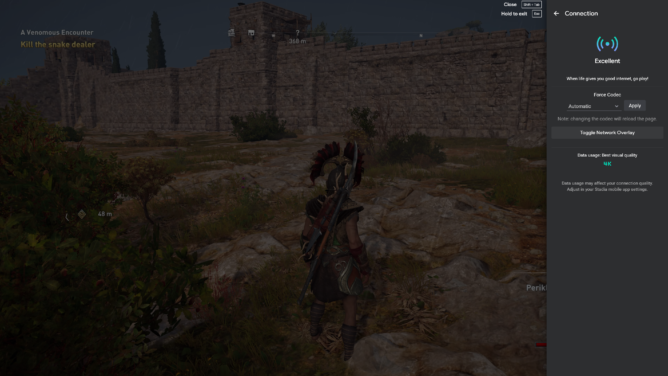 The additional settings you see in this sidebar come courtesy of the Stadia+ Chrome extension.

So far, Google hasn't officially announced the rollout, but with the first users enjoying high-res gaming, it might not be long until it does. Back in January, the company also promised that it would soon additionally introduce wireless gameplay on the web through the Stadia controller, so hopefully, this is the next item on its to-do list.