The Dow has been on a rollercoaster of a ride, suffering last week from its worst decline since 2008 before rebounding a record 5% this past Monday. While traders have rejoiced the quick turnaround, users of the popular stock trading app Robinhood are furious over a major service outage that has prevented them from trading stocks during this pivotal time.

On Monday afternoon, the first full trading day of March, Robinhood acknowledged via Twitter that the Robinhood app was experiencing a system-wide outage that prevented users from purchasing or trading stocks during the largest Dow surge in a decade.

We are still experiencing system-wide issues. Our team is continuing to work to resolve this and we’ll provide updates as they become available.

We apologize again for the trouble this has caused and appreciate your patience with us as we work to resume service.

Frustrated users were quick to respond on Twitter. Some called upon Robinhood to reimburse them for money lost during the surge, while others threatened a class action lawsuit for damages. Many users even tagged the FTC in hopes that the agency would intervene. 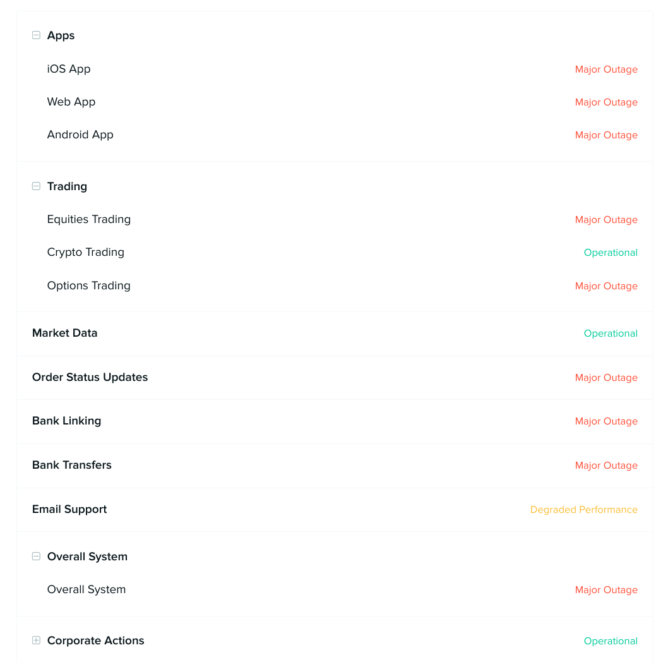 The cause of the outage has still not been revealed, leaving users to speculate as to what went wrong. Some believe the outage to be fueled by an error within Robinhood's source code that doesn't account for leap day. Robinhood was also down on March 2, 2016, i.e. right after the most recent leap day.

Hey @RobinhoodApp did someone forget to add isleap() to your python module? Imagine losing thousands of dollars because someone didn’t code for the leap year. It’s looking for 3/03 data and throwing errors out the ass. #robinhoodapp pic.twitter.com/t907LANcBo

The mass influx of users caused by the stock market surge could be another possibility for the outage, though this is also speculation. We will update this article if and when Robinhood releases a formal statement regarding the cause of this issue.

Robinhood is currently back up and running. We’re testing through the night, and you may observe some downtime as we prepare for tomorrow.

Robinhood was back online for a short time Monday night before crashing again on Tuesday morning. At the time we published this piece, Robinhood has been largely restored with full functionality expected to be available soon. For the latest updates, check out Robinhood's service status page here.

Service has been partially restored on Robinhood and we’re working toward restoring and maintaining full functionality. We’ll continue to share updates here and on https://t.co/ZS733G6N1J.

According to a statement released by Robinhood, the outage was not caused by a leap day bug. Instead, the issue revolves around a vague "instability in a part of our infrastructure that allows our systems to communicate with each other." Although this statement will do little to calm frustrations, Robinhood's service has been fully restored.

Since our initial report, the CEOs of Robinhood have issued a formal statement regarding the service outage. They blame "unprecedented load" (i.e. a heavy volume of users) for "triggering a failure of our DNS system," resulting in a system-wide crash.

To help soften frustrations, Robinhood is offering a paltry $15 discount to its Robinhood Gold subscribers, essentially providing them with three free months of premium service. The company has also pledged to compensate affected users on a “case-by-case basis,” whatever that means.

To see if you're eligible for reimbursement, you can contact Robinhood here and file your claim.

Tell Google Assistant to 'Read It,' including webpages translated from 42 languages