Google's second Pixel Feature Drop rolled out yesterday together with the March update, and it delivers quite a few tweaks to Google's Pixels. To be honest, it's probably an even bigger deal than the first Android 11 Developer Preview when it comes to user-facing changes — there are a lot of individual improvements present. I've spent the last two days or so mucking about with this latest Pixel experience, and here are my thoughts.

The biggest beneficiary of this second Pixel Feature Drop is Google's most recent flagship: The Pixel 4. It has the most exclusive new features, including the new "firm" press feature (which, outside of being technically interesting, has probably been getting more attention than it merits). There are also depth-based portrait mode improvements for the front-facing camera, a new play/pause gesture, and (ostensibly) a brighter screen when outdoors. That's a lot of changes to pile onto the company's latest flagship, and together with all the other tweaks and tidbits, it kind of makes the Pixel 4 feel like it just got an 0.1 revision.

Most of us probably won't notice the changes to portrait mode. (I can't really notice any difference just looking at a single image, though I don't have a phone on an older release to compare it to.) And the new "firm" press is of limited utility, since it just adds another way to access the same long-press menu you're used to, and it only works in a few apps. But both of these are technically interesting features, because of how Google pulled them off. 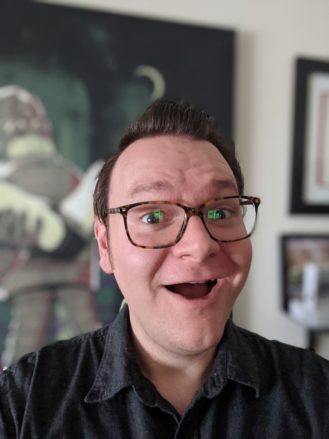 An upgraded front-facing portrait. Click to zoom and see around my hair and collar, still some errors.

It isn't as if the company came by my apartment to replace my phone or its screen, or gave me another front-facing camera that can generate depth data. Each is a result of Google combining the things the phone already had to do something new. In the case of the "firm" press feature, it works using a bit of machine learning magic for finger "smush" detection, according to The Verge. And I suspect that the new depth information gathered for front-facing portrait mode probably pulls in some of the hardware used for face unlock (given that it's Pixel 4-only). But it feels like we're all getting an incremental hardware upgrade just through an update. Not that all of the changes have me so excited.

I can trigger it every time, not everyone can.

The new firm press feature doesn't work so well for everyone. While my fat fingers had no problemo, AP's Rita El Khoury's digits proved too dainty and un-squishable for the feature to work reliably. Even if it does work, all it does is add a new interface method you don't know is there, will trigger accidentally, and provides no tangible benefit. Apple disabled its own version of the feature for a reason. I guess if you have trouble triggering it, the update also includes a previously Android 11-exclusive "increase touch sensitivity" setting, though that's probably more for use with gloves and screen protectors. 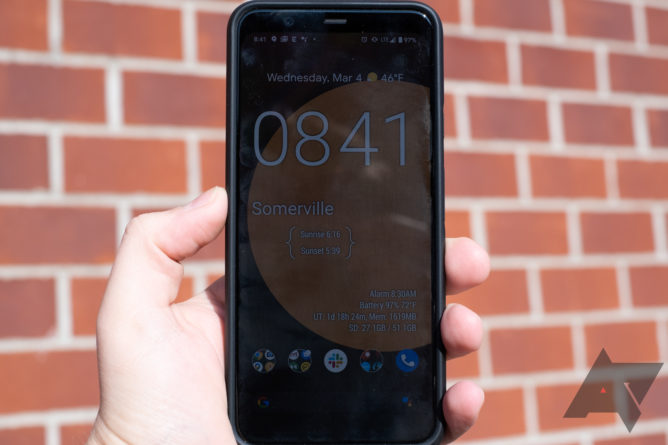 The update also delivered a new, higher brightness setting that's supposed to kick into gear in direct sunlight when in automatic/ambient mode, but I can't really tell if it's working, though sometimes I feel like I can notice a small difference. Side-by-side with my Galaxy S10+ and OnePlus 7T, it's still noticeably dimmer, and in isolation it still doesn't look great. Frankly, I can't tell if the changes are placebo or not, so the differences may be slight.

Many of the characteristic HBM (high brightness mode) effects, like overly saturated colors and weird contrast, aren't present either, which is part of what makes me think it may not be working at all. That is, if it is high brightness mode, as was previously discovered as disabled for the Pixel 4 XL, and assuming it behaves the same as other solutions.

As I had hoped, the new Motion Sense gesture appears to have also delivered the improvements I saw on the Android 11 Developer Preview. Whether you're excited about the new play/pause gesture or not, the reliability of Motion Sense gestures across the board improved significantly for me with the change. If Google had offered this level of functionality at launch, I think many reviews would have been more impressed by the feature. I was highly critical of it then, but I consider it actually useful now, even if it still gets a lot of false positives in weird circumstances.

Excluding the outdoor brightness change, all these small tweaks combined with the other features below almost make the Pixel 4 feel like a new phone — and definitely a better one.

I'm also pretty excited by the new Cards & Passes wallet (if that's what the feature ends up being called). If you've used an iPhone, then you know that the built-in wallet is easily one of the platform's best features. It isn't just for contactless payments, you can load up your gym membership, loyalty cards, and a ton of stuff for easy one-button access, and a built-in hardware shortcut saves a non-trivial amount of time compared to mucking around in apps several times a day. It's so convenient. 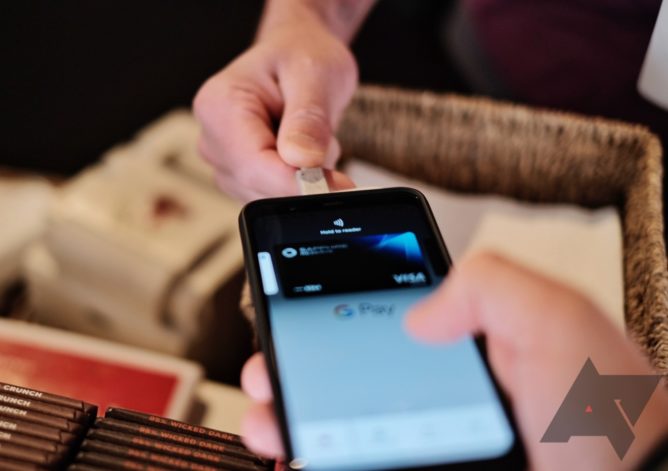 One button for payments is fast.

However, there are a few tweaks I'd like to see. For one, I don't think the gradient dimming of the top half of the display does enough to separate the new wallet interface from the app behind it, and having text from the app behind it be legible is probably not ideal from an accessibility standpoint. A blur effect would probably be better.

There's also a big of ambiguity and awkwardness with trying to escape from the wallet's interface. If you open it while you're on your home screen, dragging up with the "home" gesture does nothing, you're stuck in the wallet unless you use the back gesture or tap an empty part of the screen. I feel like it could be better and more intuitively integrated to make exiting a little bit easier.

Background blur would be nice here, that's a lot of text.

It will be a while until this new Cards & Passes wallet gets up to feature parity with Apple's, and part of that rests with developers. For example, my local gym's app works with my iPhone's wallet, but they don't play nice with Google's yet. But the tools are just about in place, and I'm optimistic that Android will finally have a digital wallet that competes with Apple's soon.

Other changes give an almost Android 10.5 vibe. Usually, new emoji are reserved for major releases, but we just got a whole set of them, plus kernel version updates, which rarely happens. None of my devices had the Tasker-like "Rules" feature until yesterday, either. Other features first spotted in Android 11, like the dark theme scheduling (which works great, but requires a screen on/off to fully change themes) and the previously mentioned play/pause gesture, add to the overall sense that this should almost be something bigger than the continued version 10.0 in Settings implies, especially now that Android 11 is on our radar.

Duo VR "Effects" in live calls are also a thing now. They're whatever.

These feature drops are great, but they're also kind of confusing. The distinction between updates is blurring so much between the yearly releases, these not-quite-0.1 Feature Drops, server-side rollouts, Play Services features, and Project Mainline, it's almost impossible to keep track of where you got something. For bloggers like me, that's one sort of problem, but for customers waiting to get new features, it almost seems like every single phone out there has a unique mix of A/B tests and features, and I wish there was a more consistent way to tell what you've got before you find it, or opt-in.

The first drop took ages to hit everyone, and even though the rollout was faster on this second one, we still saw reports that not all features landed for everyone at the same time — I had a bit of trouble with one not showing up immediately as well, and I'm still not sure if the brightness changes ever even hit me. It's great that Google has so many ways to roll out new features to fight the big platform fragmentation boogeyman, but it's almost like we're getting an even more granular feature fragmentation because of it. I don't know what features a phone has just by looking at the version numbers for things anymore, and I can't always point our readers at a sure-fire way to know short of digging around.

The Pixel Feature Drops are great, don't get me wrong, but this almost makes me miss the days when Android got minor 0.1 versions, because at least then you had something concrete with a number to point at when things changed. When will folks on non-Pixels get the new non-Pixel-exclusive features? With no version number tied to them, we have no way of knowing. Even Samsung's "Android 10" phones still can't do gesture navigation outside their stock launchers, an enhancement which debuted with the December update/Feature Drop.

Without version numbers to point at, these emerging feature differences are still immediately clear, but you can't label their presence in any easy way, really. Every Android 10 phone feels like it has a different experience and a different set of features right now. Is this the new fragmentation?