Talk about a welcome surprise. Konami has silently released Castlevania: Symphony of the Night on the Google Play Store, and you can grab it today for $2.99. More importantly, this is a quality release that brings controller support, a new continue feature, content from the Sega Saturn version, and is displayed in the original 4:3 aspect ratio, so it's most likely a port of the PSP version. Really, the only thing that is missing from today's release is Nvidia Shield support. 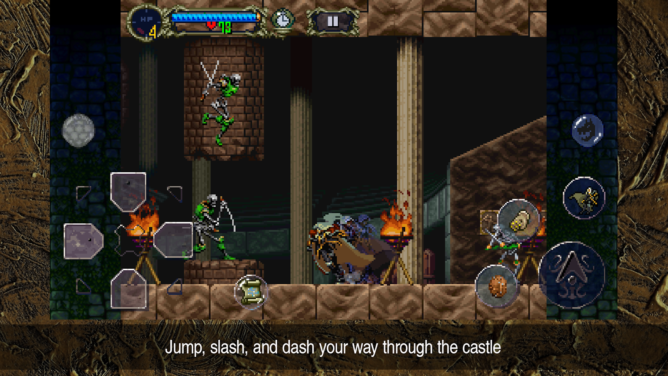 Castlevania: Symphony of the Night is highly regarded as one of the best Metroidvania games ever made, mainly because it was the first game in the series to fully embrace exploration-based platforming gameplay (like what you would find in the Metroid series). However, the fact that Koji Igarashi is the one who created such a highly polished product surely doesn't hurt its position in the history books as the game that started the Metroidvania genre, which has now expanded well beyond the bounds of Metroid and Castlevania.

This is why the arrival of Symphony of the Night on Android is a welcome surprise, especially since it's a premium release that forgoes any in-app purchases or advertisements. I'm definitely excited to see external controllers supported out of the box, though the missing Nvidia Shield support leaves me scratching my head since the game already supports physical controllers. Another downside to the controller support is that there is currently no way to remap the layout. This also carries over to the unadjustable on-screen controls.

Now I know hardcore fans won't be enthused that the Android release of Castlevania: Symphony of the Night is a PSP port, since many consider the original PS1 version the better option out of the two, though it's not like there aren't already ways to play the original PS1 version on Android through a wide selection of emulators. The way I see it, $2.99 isn't too much to ask for a PSP port, even when PSP games are also easily emulated on Android. I appreciate the convenience of the Play Store. Plus, it's not like $2.99 is going to break the bank, so I'm all for putting my money where my mouth is by supporting quality games when I see them. So if you feel the same, you can purchase Castlevania: Symphony of the Night for $2.99 through the Play Store widget linked below. CASTLEVANIA: SYMPHONY OF THE NIGHT MAKES ITS LONG ANTICIPATED DEBUT ON MOBILE FOR iOS, ANDROID

EL SEGUNDO, CALIF. – March 4, 2020 – Konami Digital Entertainment, Inc. announced today that Castlevania: Symphony of the Night is now available for mobile devices, via the App Store and Google Play Store, at a price of $2.99 USD. For the very first time, fans now have access to this all-time classic Castlevania title on mobile devices. Additionally, players can immerse themselves in this direct port of Castlevania: Symphony of the Night in all its whip-cracking, demon-bashing glory as they await Season 3 of the Castlevania Neflix series, premiering on March 5th.

Utilizing high-quality emulation by DotEmu, Castlevania: Symphony of the Night for mobile provides players with the look and feel of the full console experience including stunning graphics and soundtrack. Other key features include:

For fans of the game’s music, the Castlevania: Symphony of the Night Original Soundtrack along with 11 additional iconic Castlevania soundtracks are available on Spotify: https://spoti.fi/32vbd1w

An iconic title within the long-standing Castlevania series, Castlevania: Symphony of the Night is an exploration-action RPG where players jump, dash, and slash their way through Dracula's vast castle, uncovering a deep story filled with fearsome enemies and colorful characters.

After Richter Belmont's defeat of Count Dracula, the vampire hunter vanishes without a trace. Castlevania: Symphony of the Night brings players into a story five years later, this time as Alucard, the son of Dracula. In order to purge the world of his own cursed blood line, Alucard attempts to repress his vampiric powers and enter in to what was meant to be an eternal slumber. However with no Belmonts to storm the castle and address the evil in his homeland, Alucard awakens from his self-induced sleep and decides to investigate what transpired during his slumber.

Konami Group was established in 1973, starting as an amusement machine manufacturer for arcades. Over the years, the company has grown to include different business units across various markets. Currently, KONAMI HOLDINGS CORPORATION includes the Digital Entertainment, Amusement, Gaming & Systems, and Sports Businesses. The company went public on the Osaka Securities Exchange in 1984, the Tokyo Stock Exchange in 1988, and the London Stock Exchange in 1999. For more information, visit: www.konami.com/en.

Konami Digital Entertainment, which is the core company of Konami Group, develops entertaining content for mobile, console and card games. The company is known for global franchises such as PES, Metal Gear, Silent Hill, Castlevania, and Contra, as well as the Yu-Gi-Oh! Trading Card Game series. www.konami.com/games/corporate/en/