Xiaomi's mobile gaming spin-off, Black Shark, has come out with a pair of new phones — the third generation in the series and the first to sport 5G radios. It's also come out with some gaming earbuds as well. And if you're outside of China and want any of them for yourself, you'll be able to acquire a Black Shark 3, Black Shark 3 Pro, and/or the Ophidian Bluetooth earbuds soon enough.

Both phones offer a lot of the same major marketing points though the 3 Pro will outdo the 3 in certain categories where physical size matters. The base-spec Black Shark 3 gets the short stick, stuck with older RAM tech and a lesser power controller. That last bit will be important to one of the major points we'll point out ahead. 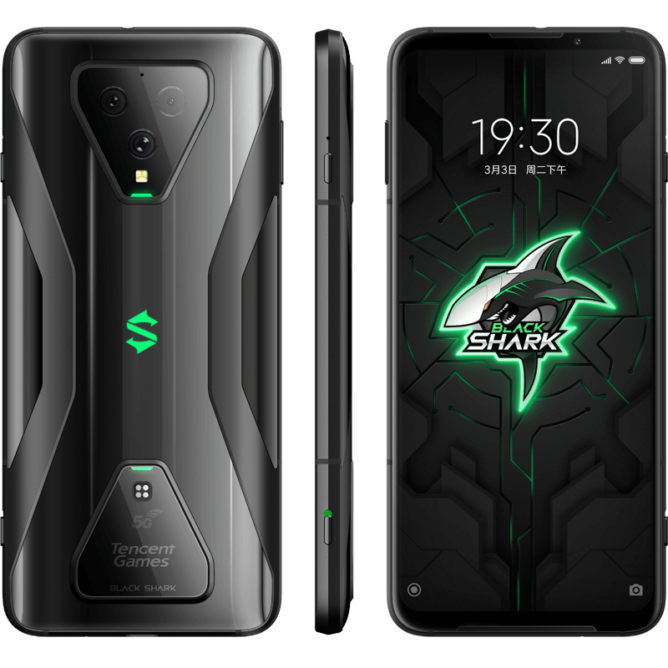 Here's the spec table for the Black Shark 3:

They're equipped with the Qualcomm Snapdragon 865 (of course there's 5G support), 8GB or 12GB of RAM — interestingly, the 3's 8GB disk is LPDDR4X while the units allotted to the 3 Pro are all LPDDR5 — 128GB or 256GB of UFS 3.0 storage, and dual batteries connected in series to support charging rates of up to 65 watts (for the base Black Shark 3 model, that top rate is 30 watts). Those batteries discharge simultaneously, a practice that may reduce wear-and-tear and extend their useful lives. In addition to USB-C cables, owners also have the option to charge magnetically with certain accessories. Black Shark also has a partnership with Tencent Games for game optimizations and software specific to its phones.

Black Shark makes the claim that these gaming phones are the "world's first" to have 5G and, in a narrow way, that could be accurate in terms of geographical reach. That said, vivo off-shoot iQOO also has a Snapdragon 865 gaming phone that also can run off 5G. 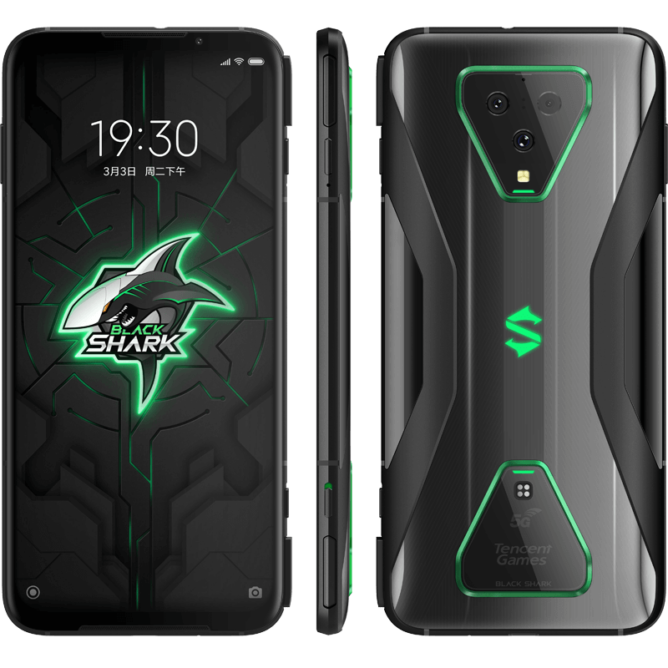 Here are the specs for the Black Shark 3 Pro:

The shared amenity payload should be familiar ones to those following gaming phones: RGB spoilers, liquid cooling with copper piping covering both sides of the processing stack, low-latency and high signal retention boasts with the latest cellular and Wi-Fi technologies as well as perpendicular antenna layouts, and more immediate, nuanced user experiences with AI-interpreted display interpolation that can bump 25fps content up to 90fps, 270Hz touch sampling for latency as low as 24ms, improved capture for Master Touch pressure-sensitive features, mappable inputs from capacitive shoulder touchpads, and — exclusive to the 3 Pro — an x-axis haptic motor.

Plus, after an absence last year, the headphone jack returns to both third-gen phones.

In mainland China, pre-sales for the Black Shark 3 began today with a starting price of 3499 yuan ($502). The Black Shark 3 Pro will be available to reserve from March 10 for at least 4699 yuan ($675). Final USD pricing will be provided when these phones go global in the near future.

Black Shark is also launching a pair of neckband-based earbuds through Indiegogo, where customers from anywhere can reserve their own for as little as $69 (though, at the time of writing, only seven units remain at that price).

These Bluetooth 5 earbuds are protected at at a rating of IPX4 and are equipped with Knowles balance armature drivers, including a 10mm dynamic coil in each bud. Latency is as low as 50ms. Plus, they have the power to last up to 14 hours along with USB-C charging.

Oh, and of course, there are RGB lights here, too.

The Indiegogo campaign has achieved 72% of its funding goal with 117 backers in the first day and will run for 30 days.