When you think about it, WhatsApp isn't the most intuitive messenger when it comes to moving from phone to phone. You need to turn on local backups or enable uploads to Google Drive and have to remember to back up before you factory reset your old phone, otherwise you might lose your most recent messages. And from a security standpoint, these backups are a nightmare, too — in contrast to messages you send and receive, they aren't encrypted. WhatsApp is looking to change that and is working on password protection for its cloud backups.

The feature is still under active development and currently not functional in any WhatsApp release. WABetaInfo still managed to activate the corresponding interface in version 2.20.66 of the messenger and shared some screenshots of how it could look like in action. Once the encrypted backups are available, you'll be able to turn them on via WhatsApp's Settings -> Chat -> Chat backup. A new Password protected backups entry will show up there, under Google Drive settings. Tapping it should let you activate the feature in the future, though right now, it just leads to an empty screen. Other than that, WhatsApp's backup workflow remains as tedious as it has ever been. 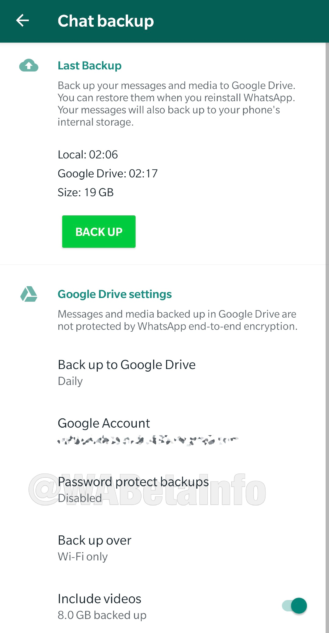 With the first evidence of the feature now showing up, it probably won't take too long until it becomes available, though of course, the WhatsApp developers could always decide to scrap the functionality altogether if they run into issues. And if you truly care about your privacy, Signal might still be the better choice (if you can convince your conversation partners to switch, that is).

The feature is still in development

Despite being just over a year since the last news on this feature, it appears that WhatsApp is still definitely working on encrypted backups. WABetaInfo showed new interface screenshots of the feature in action, with password-enabled encrypted backups to Google Drive (or iCloud Drive on iOS). Reportedly, the password information itself will not be available to WhatsApp.

As previously announced, @WhatsApp is working on cloud backups encryption.

The chat database and media will be safe from unauthorized access when using a password. The password is private and it's not sent to WhatsApp.
It will be available in a future build for iOS and Android. pic.twitter.com/Lp06PaECBX

Unfortunately, there's still no indication of exactly when this capability will be added to the app.

OnePlus 8 series rumored to launch as soon as mid-April