Whether you're looking to expand the storage space on your smartphone, camera, or gaming system, today's deal from Sandisk could have precisely the card you're looking for, especially if you need to store 4K video or other especially large files. Several MicroSDXC cards are currently on sale at Amazon, including 256GB and 400GB cards discounted to their lowest prices yet ($28 and $64, respectively) and a 1TB card that's available for only $208 — which is just a few dollars off its best-ever pricing.

In addition to impressive storage capacity, with read speeds up to 160MB/s and write speeds as high as 90MB/s on the Extreme series, these MicroSD cards are no slouches when it comes to speed. Although, you still may not want to install many apps on them. Sandisk's Extreme series cards should be able to take harsh conditions in stride, as Sandisk designed them to withstand extreme temperatures in addition to damage from water, shocks, or even X-rays. 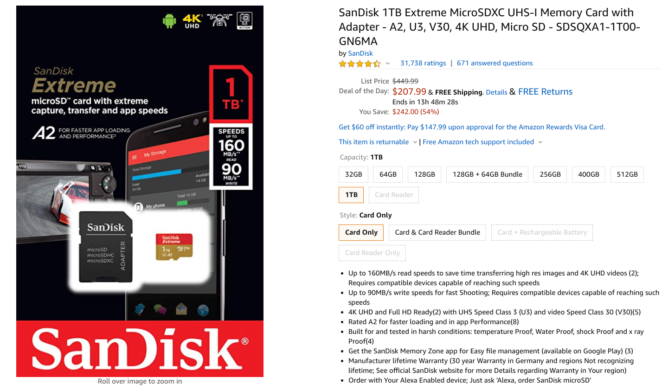 This storage-centric sale is the best we've seen from Sandisk since Black Friday 2019, so if you missed out on upgrading your storage then, now is your chance. All three of these deals will expire at the end of the day, or once stock runs out, so it wouldn't hurt to act fast.

The Serious Sam Collection is available on Google Stadia today for $29.99

Google cancels I/O 2020 out of an abundance of caution