For as flawed a Chromebook as it is, the Pixel Slate may still be your future second computing option. But when the Google Store and other retailers have kept the tablet along with its accessories have kept close to their full price into 2020, perhaps you probably ruled it out. Well, what if you could pick up the whole kit and kaboodle starting at just $499? You can now.

Mind you, during the Black Friday and post-Christmas periods, Google offered a slightly better deal: $350 off MSRP for all Pixel Slate models, meaning you can get one with an Intel Core m3, 8GB RAM, and 64GB of storage for $449. Plus, the Google Store threw in a free Pixelbook Pen and Pixel Slate Keyboard.

Still, as the store has updated its listing page copy to no longer mention the previous MSRP, that could potentially indicate that the Slate has taken a permanent price drop, though other retailers still have the MSRP comparison. Either way, this is as good a time as any other to grab one while stock still exists. 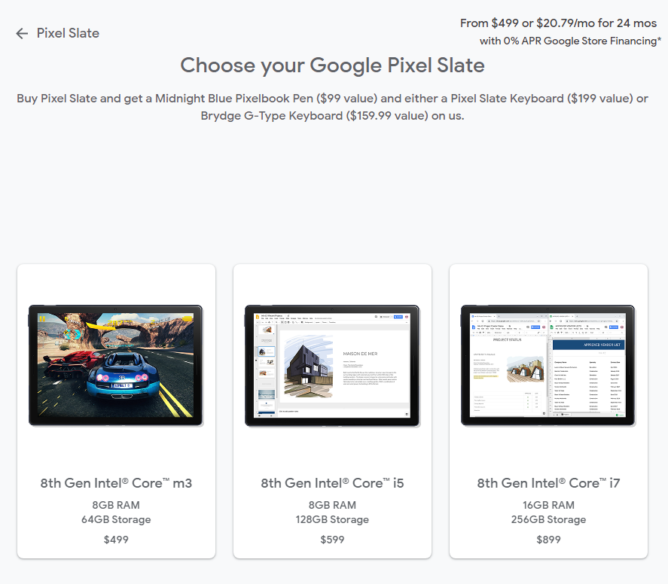 For an unspecified time, you can get an m3 model for $499, an i5 with 128GB of storage for $599, and an i7 with 16GB RAM and 256GB storage for $899 — $300 off. You'll also get a free Pixelbook Pen in Midnight Blue as well as a Pixel Slate Keyboard at B&H, Best Buy, and other participating retailers. The Google Store offers a choice between that keyboard and the Brydge G-Type Keyboard. Also keep in mind that you can get 10% back on your purchase in Google Store credit through your Google One membership. In general, you'll be saving up to $298 with the free accessories.