When you think Android TV Box, you might think Nvidia Shield TV right away, but the company best known for its graphics cards isn't the only one offering a capable big screen experience for Android. Xiaomi's Mi Box S is a neat little device outputting 4K HDR to your TV, and it's on sale at Walmart, going for only $30. That's the lowest we've ever seen and $5 less than the recent offer of $35.

Despite the bargain price, the box still checks all of the most important ... boxes. In addition to the obligatory HDMI 2.0a out, it comes with an AUX connector and a full-size USB 2.0 port so you can use external hard drives. It supports Wi-Fi at 2.4GHz and 5GHz and Bluetooth 4.1, the latter of which its remote uses to connect to the device. While the aging Android 8.1 the Mi Box S runs may seem a tad outdated, it should still outperform most of the "smart" software on cheaper TVs, and it gives you easy access to Google Assistant and Chromecast. The box is also slated to get Android 9, which is being tested as part of a beta program right now. 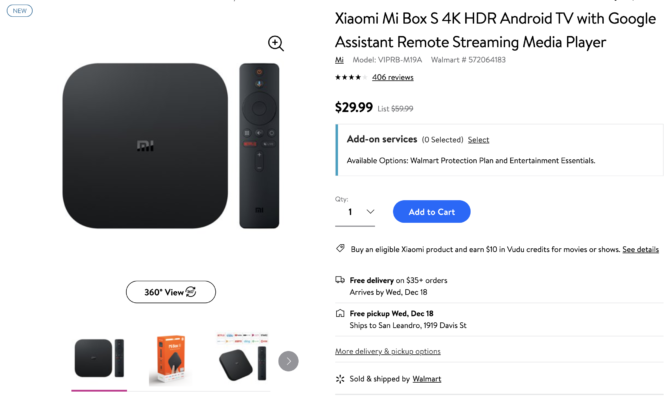 Head to Walmart to buy the device. If your TV is older, you might be surprised how much more life you'll be able to eke out of it thanks to the Mi Box S.

Good news! The best deal we've seen yet on the Mi Box S is back at Walmart. There's never been a better time to pick up one of these streaming boxes that just received a long-awaited update to Android 9 Pie.