Dark modes are becoming increasingly popular these days. Not only do they look cool, they can also save battery on AMOLED screens, as they limit the number of pixels that need to be lit. A lot of apps have started boasting darker schemes, and following popular demand, Microsoft is working on one for OneNote, which will be available across all platforms.

About a year ago, the company announced it's overhauling its note-taking app with new features that would make it easier to use. It also hinted a revamped navigation is coming up, together with visual changes. These were due to roll out on every platform the app is available on, including Android. 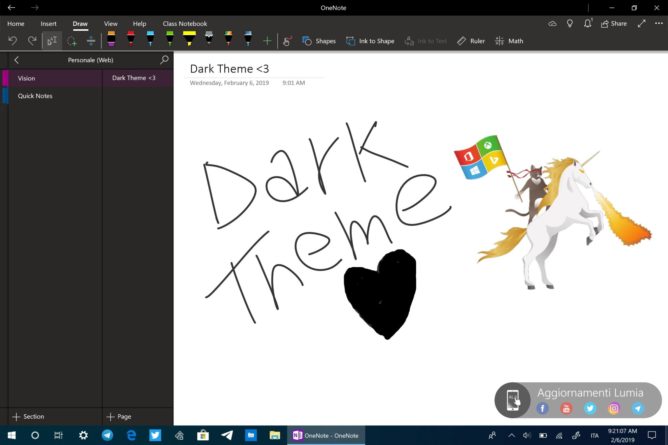 However, the company didn't mention anything about a dark mode back then, until a Windows preview version popped up with a full-functional night theme. This mode darkens all visual elements with the exception of the sheet background, which remains white — at least for the time being. Interestingly, the settings are saved in the user's Microsoft account and carry over platforms, which means turning on dark mode on your computer will also apply it on your phone.

Laura Butler, Microsoft's VP of Notes and Tasks, has acknowledged the feature exists, without even being widely available internally. We're hoping it'll be released soon, although it's unclear whether Windows users will get to enjoy it first or if Microsoft will roll it out to all operating systems at the same time. We'll update this article as soon as we know more about OneNote's dark theme and its availability.

Dark mode in OneNote is showing up for some users on Android now, but it's a server-side update on the latest beta of the app. There's no manual toggle to turn it on or off, so you either have it or not. It's also clearly still in development, as you'll find many instances of black text on dark backgrounds. Thanks, Olanrewaju and Divyanka! Live for everyone on the beta

Thus far, OneNote's dark mode has obviously been a work in progress, but it looks like Microsoft is almost ready to take the new theme to the stable release of OneNote. In the latest beta (version 16.0.12527.20120), the night-friendly color scheme seems to be mostly finished and has received its own spot in the settings where you can toggle it on and off or tell it to follow the system. 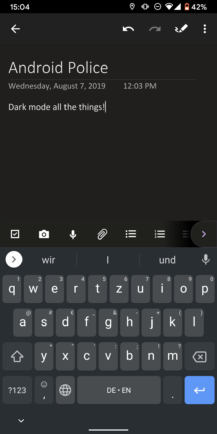 You can get the beta by joining Microsoft's test program on the Play Store or by downloading it from APK Mirror.