Evidence has surfaced that Google is working on a power menu redesign in Android 11 that accommodates smart home controls and NFC payment cards and passes. However, it looks like the company is also finally adding the latter capability to Android 10 after a few teases that hinted at the existence of the feature. First Pixel users on the stable Android 10 release report seeing their Google Pay wallet in the power menu.

The redesigned interface moves the familiar shortcuts (power off, restart, screenshot, emergency) to the bottom of the screen to make space for big previews of your payment cards at the top, similar to Google Pay's home screen. You can swipe left and right to sift through them and select which one you want to use. On top of the cards, a "Hold to reader" hint makes clear how to utilize them. 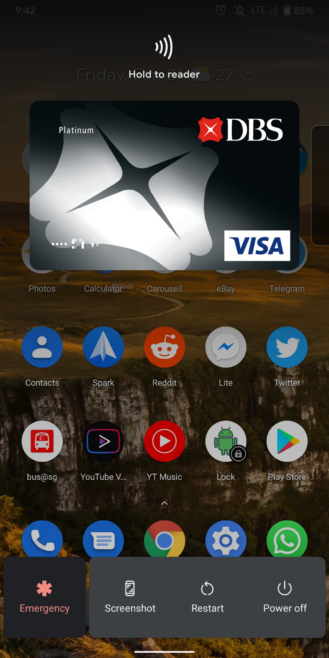 A corresponding settings panel can be accessed on any Pixel phone by starting "com.android.settings.Settings$GlobalActionsPanelSettingsActivity" with the help of an activity launcher, but for most people, this just shows a placeholder animation. Some of us at AP can also find the panel by searching for "show cards & passes" in the system settings, but that doesn't work for everyone. (This has been available in the Android Q/10 beta already.) Google might currently be testing the new power menu with a small random user base before a wider rollout. It's certainly possible that the feature will be region-locked and only accessible to Pixel owners in the beginning.