Sphero first burst onto the scene in 2011 with an adorable spherical robot that could be controlled with a smartphone. Since then, the company has released all kinds of unique products based on this concept, like these Star Wars robots, a Lightning McQueen RC car, and the Bolt. Right now, you can snag one of Sphero's more ambitious products, the Sphero RVR, for $172.34 ($77.65 off) at Amazon.

Unlike Sphero's original robotic orb, the RVR features a tank-like design with four wheels, all-terrain treads, and a high-torque engine. It also features a swathe of internal sensors, including an accelerometer, gyroscope, IR, color sensor, and light sensor. On top sits a removable roll-cage to prevent unwanted flips,  while the rechargeable battery promises plenty of juice for excursions. 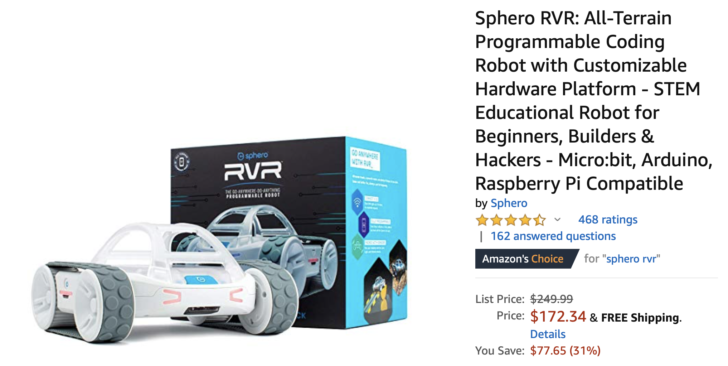 Users can tap into the Sphero Edu app to code the RVR with Draw & Drive, Scratch blocks, or JavaScript, and more experienced developers can even install SDK and API libraries. The RVR also works with a number of third-party hardware, such as Raspberry Pi, Arduino, micro:bit, and Sphero’s littleBits.

The price of the Sphero RVR has been bumped down an additional $14 since our initial report. Right now, you can pick up the all-terrain programmable robot for $158.19 ($91.80) at Amazon via the link below.