With every new version of Android, you can bet on a few aspects of the OS being altered if not completely overhauled: DND, notification handling, permissions, and the share menu. There's no way Google could leave these alone, but at least the change it has introduced in the latest March 2020 security patch / Feature Drop is one we've all wanted: app pinning.

The option to pin apps to the top of the share sheet, which was introduced with Nougat, was removed from Android with Q beta 3, never to be seen again. Sure, the final Android 10 share menu is faster and better in a few ways, but pinning the apps you use the most to the top is a great way to avoid having to scroll or trust an AI to suggest what you may need next.

Pinning is back with the March patch: Simply tap and hold on any app in the share sheet and you'll be able to pin it to the top (below direct share targets, obviously). If the app offers several sharing intents, like Twitter (Tweet and Direct Message) or Instagram (Feed, Stories, Direct), you can pin any of these separately.

Pinned apps show up below direct share targets and above the full app list. Even though you can pin more than four, you'll only be able to see four intents. That row isn't scrollable yet. 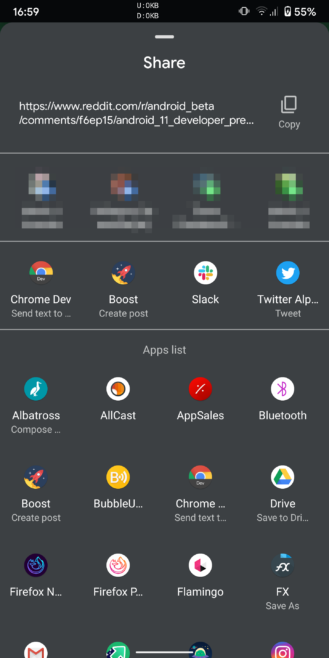 This is certainly an improvement, but we're still lacking the ability to pin direct share targets separately, remove apps from the share menu if we never use them, and completely disable direct sharing if it's not a feature we need.

This article has been updated to say that the feature is part of the March 2020 security patch. It previously linked it to Android 11, but it turns out that was a false connection. Android 11's first Developer Preview shipped with the March security patch early, leading to a confusion between the features brought by the patch and those genuinely new in Android 11. Now that the patch has rolled out to Android 10 devices, we're able to confirm which new abilities are due to it.