This time Google is releasing its first preview a bit earlier in the year than it usually does, but this should give developers more time to prepare for Android 11 and provide much-needed feedback on the changes.

Google is delivering quite a few changes with this first release of Android 11, and while it will take us a while to sift through all the tweaks and differences on our own time, Google has told us some of the things to expect in this new release.

Among the headlining changes are further enhancements to user privacy, with Android 11 building on a permissions tweak we saw in Android 10. In addition to the "Allow only while the app is in use" permission, which otherwise prevents background access without your consent, we'll be getting a new temporary, one-time permission for even more granular control. Scoped Storage is making a return with some tweaks, plus new security classifications for "strong" and "weak" types of biometrics.

Carrier darling 5G is also getting some love, with Android 11 including a handful of changes that let developers better make use of super-fast connections. In more user-facing changes, Google is breaking out "conversation"-based notifications into their own section, for things like messaging, and Android 10's disabled  "bubbles" (more recently spotted in Google Messages) are back.

Project Mainline — a modular, Play Store-based way to deliver system-level updates that initially debuted with Android 10 — is also getting support for twelve new modules. That's a complicated way of saying Google can update even more things in Android 11 through the Play Store, without waiting for device manufacturers to deploy updates. 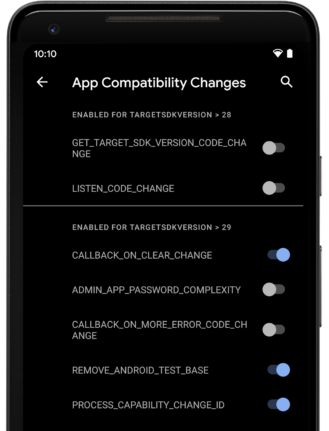 Other tweaks include more machine learning optimizations for developers to harness, tweaks to better support "waterfall" curved edge displays, a huge number of new APIs, plus other changes that should make Android 11 a bit easier for developers to target and test.

Where to get it?

As always, this first Developer Preview is more of an alpha than a beta, you probably shouldn't use it on your daily driver, and expect to run into issues. To make sure the average Joe doesn't accidentally install it on his Pixel by mistake, the only way to pull down Android 11 right now is by manually flashing the image yourself — you can't just register a phone and toggle a checkbox, as you will be able to in later releases.

Known issues for this build are listed here. In the coming hours, we'll be diving into the new release ourselves, so stay tuned for more coverage of Android 11's changes.